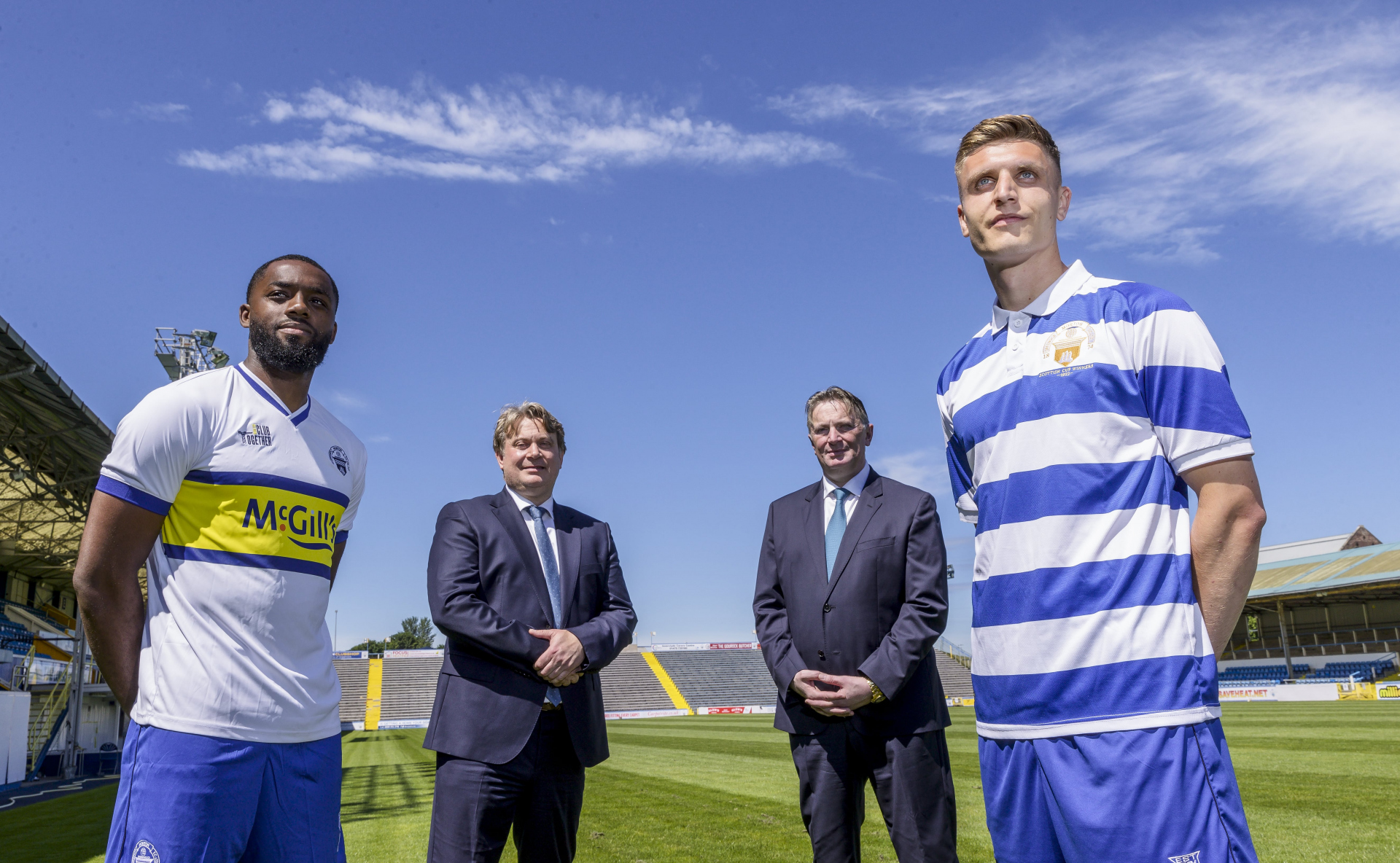 Greenock Morton have today launched two exciting new strips for the 2021/22 season for the club’s first campaign under community ownership.

As part of the announcement, the club are delighted to confirm that McGill’s will be the new main shirt sponsor of the club for the 2021/22 and 2022/23 seasons.

Local businessmen Sandy and James Easdale will be supporting the club as main commercial sponsors for the next two seasons via four of the businesses in their Arranglen group of companies.

McGill’s, Blairs Windows, Saveheat and Arc Fleet Services will all be represented on the away and third kits for the coming season.

The club has launched a new home shirt with the traditional blue and white hoops, but with a couple of very special touches.

As a tribute to the centenary of the club’s Scottish Cup win, and to mark the beginning of a new era for the club, the new retro home shirt has been sponsored by McGill’s but will have no sponsor logos on the front or back.

The sponsorless element of the home shirt is two-fold.  Without a sponsor, the shirt has a truly retro feel to it as a tribute to the centenary 1922 Scottish Cup winning strip.

Having the shirt without any sponsor logos on the front or back also marks the beginning of a new era for the club under community ownership.  As a tribute to the fan ownership element, the shirt focusses on the club and its history ensuring this unique strip belongs to the fans.

A new white third kit has also been announced which will have the McGill’s logo front and centre in a striking yellow stripe.

Last year’s navy third kit will now become the club’s away kit for the coming season, and will also showcase the logos of McGill’s, Blairs, Saveheat and Arc Fleet Services.

The two new strips have been designed by Morton fan Gavin MacIntosh.  Gavin’s strip concepts have caught the eye across social media over the last 18 months and now two of his designs are to become a reality.

Morton Club Together Director Graham Barr said, “We are absolutely delighted to get this sponsorship deal agreed and would like to say a massive thank you to Sandy and James for their continuing support of the club.

“The club have had excellent support from the Easdales for a number of years through McGill’s, Saveheat, Arc Fleet Services and Blairs, and we are extremely grateful for their ongoing and increased support for the next two seasons.

“We would also like to say a special thank you to them for making the unique home kit with no sponsor logos possible.

“This will be a memorable shirt for the club and fans that will not only celebrate Morton’s history, but also mark the beginning of a new era.”

Sandy Easdale said, “The club is heading into a new era but we’re delighted to be continuing our support of Greenock Morton.

“We’ve supported the youth set-up and stadium advertising in recent years, and we’re pleased to add shirt sponsorship for the next two years.

“The new strips look great and will hopefully mark the start of a successful season for the club.”

James Easdale added, “Morton plays a huge role in Greenock and surrounding communities and we want to continue offering our backing for that.

“We both still live locally and Inverclyde is hugely important for our businesses.  When Morton are successful it lifts the whole town and in the first year of fan ownership, we want to help the club get off to a great start.”