Jim Duffy’s first recruit of the summer was 27 year old midfielder Bobby Barr from Brechin City. There had been rumours in the last few weeks of the season that Barr would be signing for the Ton but it was made official on the 15th of May, shortly after the title winning game against Peterhead.

Barr began his full-time career with St Johnstone after spending some time with Motherwell as a youth player. However, after failing to break into the first team he moved to Albion Rovers, managed by Paul Martin. During his time at Albion, Bobby won the Third Division player of the year award.

His stay at Rovers lasted two years before he moved on to sign for Gary Bollan’s Livingston. With the team having just been relegated to the Third Division after going into administration, Barr proved to be a useful signing. In his first two seasons at the club, he won the Third and Second Division title, both achievements which the player ranks very highly in his career.

After a three year spell at Livingston, Barr again moved on to his most recent club, Brechin where he spent two seasons. Barr made 38 starts, five sub appearances and scored six goals for Brechin City in all competitions last term as they finished fourth in League One and qualified for the promotion play-offs. The new recruit was virtually an ever-present in the team and had a significant role to play in Brechin’s push for promotion. The winger’s performances throughout the season also earned him a place in the League One team of the year alongside his new team mate Mark Russell.

Barr will be no stranger to many Morton fans, having played at Cappielow on a number of occasions recent years. Most recently, Barr scored in Brechin’s 2-0 victory over Morton at Cappielow in April. Having been part-time for the last few years, the opportunity to join a full-time club proved to be a very attractive prospect to the 27 year old. While many players are reluctant to give up their work outside of football, Barr was more than willing to for another crack at going full-time.

On joining the club, he said, “I spoke to the manager last season and was very happy with what he said. Getting back full-time was a really big part. I was working but it wasn’t a great job so I could leave at any time. “The chance to play in the Championship and go and compete against decent teams. You look at the league and you’ve got Rangers, Hibs, St Mirren, Falkirk, Queen of the South – every week is a test. “No disrespect to League One because I really enjoyed playing there but going to better stadiums and better surfaces with better players appeals. It’s also good to be training every day again.” Last Saturday’s 3-0 defeat to English Championship side Rotherham marked the end of Morton’s pre-season with the competitive action now ready to begin.

On how the team has done in pre-season Barr said, “I think we’re doing ok, although there’s still a bit to work on. We’ve had three tough games last week but pre-season is pre-season and the real stuff starts on Saturday against Dumbarton. “Hopefully we can get two good results in the cups and it can give us a wee platform and some confidence going into the league games which would help us do well this season.” “Fitness wise, from a personal point of view, I did a bit before I came back because this is my first full-time season in three years and my body isn’t used to it. Being part-time is completely different so I’m happy with that side. Hopefully I can get in the team and get a bit of form and confidence.”

As mentioned, Barr has played against the Ton on a number of occasions, on what the fans can expect from him, Duffy’s new recruit said, “I think the fans have seen me enough to know what I’m about. I think I’ve always done well against Morton at Cappielow whether it was with Livi or Brechin. “I’ll be trying to get on the ball and create chances and try and go by players and hopefully it will be decent to watch. Going by players is probably the best part of my game.” “Last year was last year and I was a Brechin player, every time on the park I wanted to win. If the Morton fans were booing me and on my case when I was playing against them I was obviously doing something to get under their skin.

I think they’ll have forgotten about me scoring against them if we’re doing well. Hopefully we can get good crowds and they’ll get behind us.” On the season ahead, Bobby said, “I’m really looking forward to going to Ibrox and Easter Road and obviously the derbies against St Mirren. We’ve also got one on the telly early on in the season so hopefully we can put in a good performance in front of the cameras. “Personally my goal is to get in the team every week, set-up goals and score a few. “As a team, the first thing is making sure we get off to a good start and then take things from there. Look at Queen of the South the last couple of years, I don’t think anyone expected them to finish fourth so if we can get a good start you never know what can happen.”

The new winger’s first competitive game will be an extremely tough one in the Petrofac Training Cup against fellow Championship side Dumbarton. The following Saturday, the winger will face a tricky home tie against League Two side Elgin in the League Cup. As Barr said, it will be vital from a personal and team point of view to get off to a good start and provide a platform to base the season on.

With the postponed fixtures versus Alloa Atheltic and Inverness Caledonian Thistle being moved to midweek, places have become available… 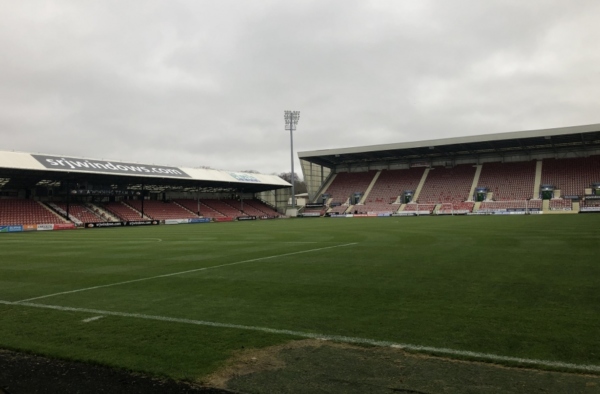