Conor Pepper joined Morton at the beginning of last season after being released by Inverness in May.

The 21 year old began his career in Ireland where he played for St Patrick’s, mostly playing for the under-19 team but also making one first team appearance. In 2012, he moved to Scotland and signed for Inverness and made his first competitive appearance against Hearts. In that game Pepper marked his debut with a late goal to earn a point in a 2-2 draw. However, after a promising start at Caley, his first team appearances were limited and much of his time was spent playing for the reserves.

Last season, Pepper made 31 appearances for the Ton but was unfortunate to miss out on a number of games in the run-in due to injury. He also made it onto the scoresheet twice; in the 4-0 win over Stranraer in August and the 2-1 win over Dunfermline in September. He also amassed 9 yellow cards and one red over the course of the campaign. Although Conor played in midfield all of last season, he has found himself playing at full back due to injuries this year.

Since moving to full back, the team have only conceded 2 goals in five games and have looked solid defensively. On his move to Morton from Inverness and how he has enjoyed life in Greenock, Pepper said, “It’s been great, my last year at Inverness was difficult because I wasn’t playing and it was annoying always playing with the first team and always being with the under-20s but since I’ve come to Morton it’s been all about first team football and getting games under my belt. Everyone at the club has been very good.”

“Last year was brilliant, I don’t think a lot of players have a winner’s medal to their name at the end of their career. “It doesn’t really matter what division or where you’re playing, winning the league is always enjoyable so that was brilliant.” “The season was a bit stop-start for me with injuries so it was a bit frustrating but I think I was doing ok at the start and was a bit disappointed with how the middle part of the season went. “Then I missed a lot of the run-in because of my knee which was really frustrating. I got my injections at the end of the season and I’ve not had any problems since coming back so everything is good.”

As mentioned, Pepper has been playing in defence for much of this season. He joked in front of Craig McPherson who was also in the room, ““There’s a lot of clean sheets on the stats this season you’re right; I must be doing well!” On a more serious note, he said, “I spent the last 6 months at Inverness playing right-back with the under 20s because there was nothing really happening for me with the first team.

“I thought maybe a change of position would be good for me but when I came to Morton I wanted to play in midfield but since I’ve been playing in defence this year I’ve been really enjoying it. It’s been great playing in the team which has been doing really well with only Hibs beating us so far.” As well as playing on his more favoured right side, Pepper has also had to fill in on the left due to an injury to Mark Russell and has continued to impress. He said, “I’ve found left-back allright, it’s pretty similar in terms of positions defensively I’ll just sometimes come onto my right foot but it’s not been too difficult to adapt.”

“I think collectively we’ve all been better defensively. The whole team has been putting in a shift right from the front. “The guys in front of the back four have been doing their job which makes it a lot easier for us. I don’t think I’ve been a major factor but I feel like I’m contributing to it.”

After a couple of decent draws against Falkirk and St Mirren, Morton finally got the all-important first league win of the season against Alloa in the same week that they knocked Queen of the South out of the League Cup. Conor said, “A lot of it is down to getting a bit of momentum by putting wins together, it’s the best thing you can do. “We had a tough game in the cup against Queens, they’re a good side and that was a good win not just in terms of the cup but also going forward in the league. They’re a tough side in our league and we’ve beat them so it’s good to get have that going forward into the next few weeks.”

On the season as a whole, the 21 year-old said, “I’m looking forward to competing against a lot of the tougher sides. I know a lot of people maybe put us down as being down there with the relegation side of the league but testing ourselves against the bigger sides and hopefully getting some wins against them.”

Having started off the season fairly positively despite a number of injuries throughout the squad, I asked Conor what the goal is for the team this season. He replied, “I don’t really know what the goal is, it’s still early in the season so nobody really knows what to expect. “We’ll see what happens after we’ve played everybody then set some goals after that. I think we’ve done well so far. “We could maybe score a couple more goals but I think that’s being harsh because we’ve had a lot of injuries and not had a full squad together and obviously if we’re not conceding we can’t lose games.”

With Mark Russell coming back from injury soon, Pepper’s performances will give Jim Duffy a selection headache with his new found full-back staking a claim to a regular starting spot in that position. However, with the long-term injury to Frank McKeown, Jim Duffy will be delighted to have the versatility which Pepper offers the Morton squad and he is sure to be an important player for the Ton throughout the season. 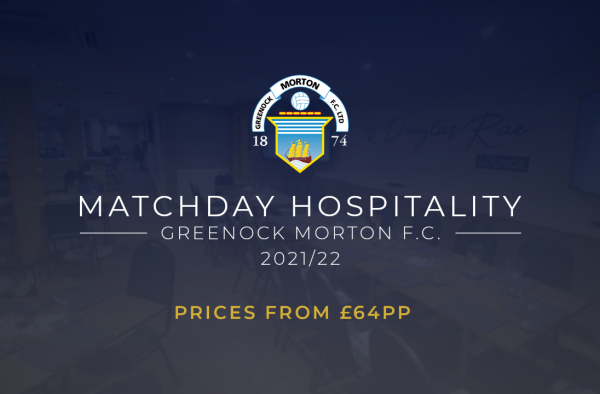