Gaffer Jim Duffy says Saturday’s 1-1 draw with Dundee United was a fitting way for his side to end the regular league campaign and head into the Premiership promotion play-offs.

Morton and Ray McKinnon’s Tangerines shared the spoils at Cappielow at the weekend after Kudus Oyenuga’s headed opener was cancelled out by Blair Spittal.

The result meant that the match turned out to be a dress rehearsal for the play-off quarter-final, and gaffer Duffy was pleased with the way his side had concluded the 2016/17 Ladbrokes Championship season.

Speaking exclusively to gmfc.net, he said: “I’m delighted with the point because I feel the players deserved something from the game.

“Dundee United were the team forcing it, there’s no question about that; they’re looking for it. In the last 15 or 20 minutes, we were hanging on a little bit because we had a few players who hadn’t played regular games and a few injuries.

“They were maybe feeling the pace, but the thing they showed in abundance was that commitment level, which was exceptional again on Saturday.

“Although Dundee United had a lot of the pressure, we had a couple of really good chances and Cammy Bell has made a couple of great saves, particularly one towards the end of the game from Nizzy [Aidan Nesbitt].

“Dundee United were throwing everything at it. They moved [Mark] Durnan up front, they’ve got [Thomas] Mikkelsen up there, they’ve got [Tony] Andreu on the pitch … they’ve got so many options.

“So we just had to hang on in there and defend resolutely as a team, and we did that. I was delighted with the attitude of the players, and it gives everybody belief that if we can match any team in this division.

“That’s five games we’ve played Dundee United and we’ve done well in all of them. They’ve all been close games. There were a lot of positives for us on Saturday.

“It was a good way to finish our league campaign at Cappielow. Getting 52 points is a huge improvement on last year and all credit to the players. We’ll now look at the play-offs in isolation and see if we can be the surprise package.”

The Ton suffered a number of injuries at the weekend, with Bryn Halliwell and Ross Forbes both forced off while Ricki Lamie had to struggle through the last few minutes to see out the game.

And Duffy explained: “Ross got a knee right in the base of the back. It’s an awkward one, because it’s right on the bone and he’s stiffened right up. Having the short turnaround to the game on Tuesday, it’s one we’re going to have to look at.

“Ricki also got one right at the end of the game, an impact on his ankle joint. So that’s a wee bit of an issue for us as well, because Lee [Kilday] was feeling his ankle on Friday and didn’t make the bench and will be struggling for Tuesday.

“Then Bryn suffered a thigh strain. He was feeling it at half-time and said he would go back out and try it. But he couldn’t run and so couldn’t anticipate through balls as he had done in the first half.” 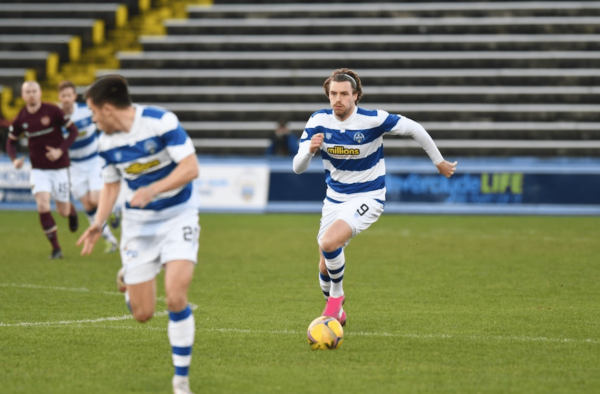