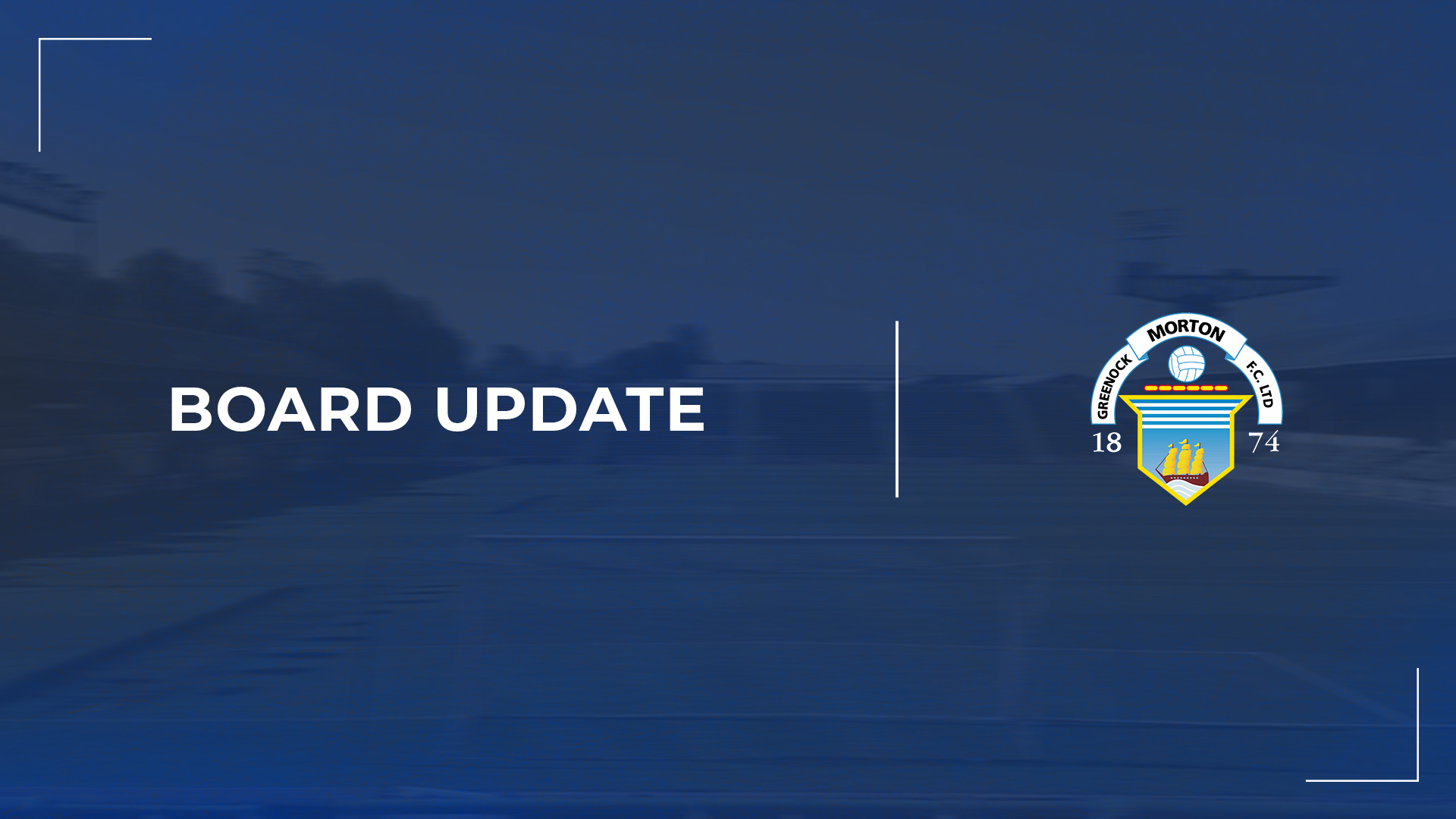 Ahead of the start of the 2022/23 Championship campaign, the Greenock Morton Board wanted to give a quick update for supporters and take the opportunity to say thank you.

Firstly, we want to thank the near 850 of you that have purchased your season ticket for the upcoming cinch Championship season. As part of this number, there are nearly 200 under-12 season tickets, and it is really encouraging to see that level of engagement from the next generation of Ton supporters.

We would also like to thank Morton Club Together’s 950 members for your continued backing. This backing helps contribute £10,000 per month to the club, money which is vital for the viability of Morton. Your support is unwavering and every penny you spend on the club or put towards the club counts.

Community ownership has been and is an exciting opportunity for Greenock Morton. Having officially taken ownership in October 2021, we are now approaching the end of the first 12 months of community ownership and entering our first full season of it.

While community ownership is an exciting opportunity, it is also an extremely challenging one.

We are sure that our fanbase now know and understand that the club no longer has one wealthy individual propping up our football club. There is nobody there to write off any and every loss made, or supply funds whenever the club is in need. The reality of this is that if money runs out, the club is then in danger. We cannot risk overspending as a club because of the fact there is nobody to foot losses.

The reality of this is that we need to budget accordingly. First team manager, Dougie Imrie, has worked extremely hard to assemble the 20-man squad he currently has, with lots of business done early in the window to allow the team to get a full pre-season together and prepare for the start of the campaign.

The Board and Dougie have had many honest conversations about the budget, and while we would all love it to be bigger, we must be sensible with our spending. We would like to thank Dougie for working with us on this, and for working so hard with limited resources. Every effort is being made to supplement the money available with lots of hard work going on behind the scenes to try and generate additional income or make savings elsewhere but the reality is that funds are extremely tight.

This is not to say we are standing still. We are in constant discussions about a number of initiatives and opportunities. We have had initial conversations with individuals who believe in the idea of community ownership and may provide us with additional funding on an interest-free loan basis.

There has also been another approach from a currently anonymous consortium of businessmen to provide the club with a loan. The terms of this consortium’s offer are still being discussed and will be put to the MCT membership once confirmed.

However, we are also continuing to explore the other options on the table that we have mentioned above as a means of additional finance.

It was also mentioned at the MCT EGM about the club being in discussions with a new sponsor. At the time of the EGM that had not been confirmed and it is now something that has unfortunately fallen through. This was largely because the offer did not materialise in the way expected. We could have taken what was on the table, but it would have undervalued what we can offer. The club continues to work tirelessly to attract new sponsors, and there are various opportunities for individuals or businesses to get involved.

As previously mentioned, the culture of budgeting at the football club has had to be completely overhauled. This has been a huge undertaking since taking over the club and is not something that could be fixed overnight. Last season saw a number of unforeseen circumstances that impacted club finances. This has continued into the 2022/23 season, with energy and utilities being one of those unplanned costs that we have to pay. The club utilities bill has increased by 325% for example. We’re sure we aren’t the only football club to have been affected by this, and we know our fans will be hugely impacted by the rising cost of living too.

We continue to be in control of our own destiny as a football club. However, the honest truth is it is hugely challenging running a Championship-level football club. Without the contributions from MCT members, season ticket holders, individual match purchasers, replica kit buyers, matchday hospitality guests and many more of the Morton community, the club as we know it now would not be the same.

We are still committed to making community ownership work. We still believe it can be a success, and we can galvanise the local Inverclyde community and the fans of the club that live far and wide. Community ownership is an amazing opportunity, and everyone on the Morton board, MCT Board, the staff at the club and the wider MCT team are committed to giving everything to make it a success. We’ve asked a lot of you already as fans of the football club, and we understand how tough times are now. Your backing is what makes the football club.