Morton will have their sights set on claiming a third successive Ladbrokes Championship victory when they welcome Alloa Athletic to Cappielow tomorrow.

The Ton compeleted a remarkable seven-day turnaround last Saturday by following up a 5-0 thrashing away at Ross County with back-to-back triumphs.

Jonatan Johansson’s side travelled to Dumfries and recorded a fine 2-1 win against Queen of the South before picking Partick Thistle apart at Cappielow on matchday 12.

They are on home turf again this weekend and the aim will be to maintain their momemtum and build on last week’s memorable 5-1 win against a Wasps side sure to prove a tough nut to crack despite their league position.

Connor Bell, Denny Johnstone, who recently received injections in his knee, Ben Armour, and Reece Lyon are all expected to miss out, while Chris Millar has an outside chance of being involved after missing the last two matches.

1 – Jack Iredale scored his first goal of the season when he netted against Partick.

1 – Gary Oliver scored his first league goal of the season when he netted against Partick.

2 – Morton have recorded back to back league victories, with wins over Queen of the South and Partick.

3 – Morton have won three of their last four fixtures.

Striker Robert Thomson spent the first half of the 2012/13 season on loan with then-Second Division Alloa, scoring four goals in 15 appearances before returning to Dundee United.

Midfielder Chris Millar‘s first double in over 12 years saw Morton record a 2-0 win over Alloa Athletic at the Indodrill Stadium back in August.

Although the 35-year-old enjoyed a reasonable return in his first spell at Cappielow, goals proved harder to come by over the course of a decade at St Johnstone, for whom he had netted once in the last seven seasons.

Yet, just six games into his Ton return, Millar rediscovered his scoring knack against the Wasps, breaking the deadlock with a precise, angled finish on 15 minutes.

After getting his name on the scoresheet for the first time in three and a half years, he added a second for good measure – and in fine style too.

Stepping on to Michael Tidser’s lay-off, Millar lasered a rising drive into the top-right corner from 25 yards to both bag his first brace since a 2-1 win away at Gretna in March 2006 and fire the current Ton side to victory.

^Proof of entitlement must be provided for concessionary tickets, while proof of age is required for children between 12 and 17 and those between 18 and 20.

*Children under 12 must be accompanied by an adult at all times.

Please note, prices apply irrespective of the day or time of purchase.

Supporters are asked to purchase in advance where possible in order to avoid excessive queues at the ticket office on a matchday.

Briefs can still be bought from the following outlets:

Sinclair Street ticket office – Saturday matchdays from 11am to 3pm

Tickets can also be purchased in advance online at www.gmfctickets.co.uk or by calling the club on 01475 723571. These can be collected at the ticket office on matchday.

All home fixtures are also available to be pre-loaded onto fan cards via Interstadia’s dedicated club website, www.gmfctickets.co.uk.

Children Under-12 Go Free With Season Card and Fan Card

Children Under-12 in possession of a season card or fan card attend all home league fixtures free of charge, and parents are encouraged to sign their kids up for the campaign if they have not already done so.

Those children without a season card or fan card will be required to purchase a physical match ticket with scannable barcode at a cost of £1.

You can order or renew your child’s season ticket online by CLICKING HERE or by contacting club secretary Brendan McEleny on admin@gmfc.net or calling 01475 723571.

Over this weekend countless acts of remembrance will take place across communities the length and breadth of the UK and indeed beyond our shores as today’s generations remember those who paid the ultimate sacrifice.

The focus of this year’s acts of remembrance is the centenary of the ending of ‘The Great War’, as well as also remembering the many thousands who gave their lives in other conflicts across the globe.

Greenock Morton Football Club have invited our visitors, Alloa Athletic, to join us in our own act of remembrance tomorrow, and this will take place prior to kick-off.

After the chairmen of both clubs lay a wreath, we observe a period of silent reflection as our piper for the day, Stuart McMillan MSP, plays a lament.

In the midst of the COVID-19 pandemic, Chief Executive Dave MacKinnon provided an important update on the Morton Weekly… 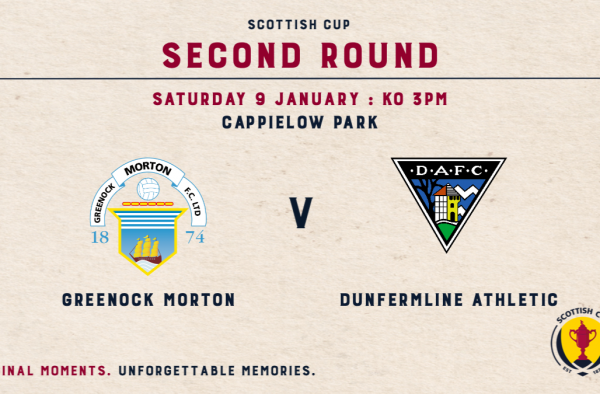 Following a pitch inspection as requested by both clubs, the Club can now confirm that tomorrow's Scottish Cup Second…