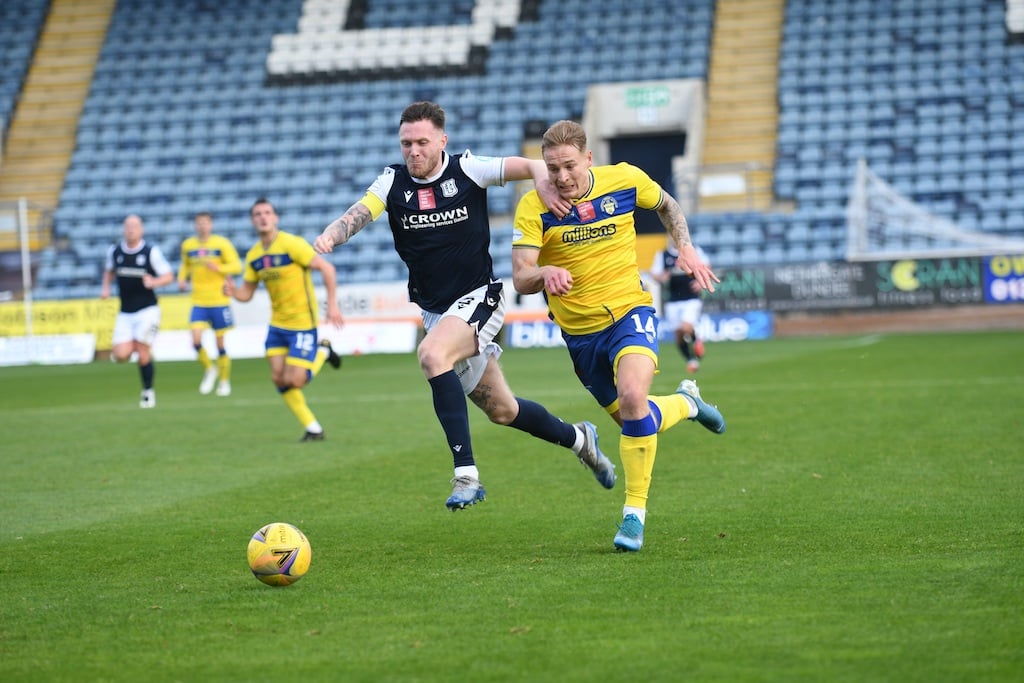 
Morton take on Dundee for the final time this season as both teams meet at Den’s Park tomorrow afternoon in the Scottish Championship.

The Sinclair Street side head into the game against the Dark Blues following a 4-1 defeat against Inverness on Tuesday night and manager Gus MacPherson will be hopeful that tomorrow’s game will be the tide turning experience his team require at the very important business end of the season.

And as the ‘Ton boss said post-match on Tuesday he wants to see a reaction from his players following their defeat to the Caley Jags and the perfect way to bounce back would be coming away with all three points tomorrow.

A win which would certainly go a long way in preserving the Greenock men’s second-tier status for the 2021/22 season.

James McPake’s side have won four out of their last five games as the Dundee boss was awarded the Manager of the Month award for March. Their last outing was a convincing 3-0 victory of Ayr United at Somerset and with momentum building, they will be looking to make it back to back wins as they battle it out for the runners up spot in the division.

4 – Aidan Nesbitt is the top goalscorer for the club this term with a total of 4 goals.


26 – The ‘Ton have scored 26 goals in all competitions so far this season.

Dunoon native, Declan McDaid came through the youth ranks at Cappielow and made one first-team appearance before electing to move to Partick Thistle in the summer of 2013. He signed for Dundee in 2019 following spells at Cowdenbeath and Ayr United.

Paul McGowan came to the ‘Ton on loan from Celtic in the 2006/07 season when Morton  became Second Division winners. McGowan was named ‘Player of the Month’ for January in that season and was also chosen for the ‘Team of the Year’ for the division.

Dundee signed Paul McMullan from rivals Dundee United last month on a pre contract before being loaned out until the end of this season. The 24-year-old spent three months of the 2015/16 season on loan with us here from Celtic at Cappielow, scoring one goal in 11 appearances

The Dark Blues boss James McPake had a brief spell as a player with Morton in 2006, signing on a short-term loan deal from Livingston. During his time with the club he scored 2 goals in 10 appearances.

Morton were disappointed not to have taken all three points on in February as they were held to a 2-2 draw with Dundee at Cappielow in the Scottish Championship.

The ‘Ton went ahead, just a few minutes before half time on 41 minutes, in sublime fashion with a clear goal of the season candidate. A long ball up the park was headed down outside the box by Lewis Strapp to the feet of Craig McGuffie who, with his first touch, unleashed a wicked swerving drive that beat the goalkeeper and into the net to make it 1-0.

James McPake’s side would come out with much more determination in the second half as they tried to get level and they done exactly that on 65 minutes when a through ball found its way to Jason Cummings who held off Strapp to ran in on goal and blast the ball passed McAdams to equalise.

If anything, the goal would prove be a momentum booster for Morton as within three minutes they were back in front. A quick counter attack saw Kalvin Orsi played the ball out to McGuffie who hit a high cross unto the box which Luca Colville met with his head to beat Hamilton and give the ‘Ton the lead for the second time in the game.

It was looking like another frustrating day for James McPake until his side found an opening to tie the game again on 81 minutes from a quickly taken set piece. A free-kick on the edge of the box left a 2 on 1 situation with Declan McDaid and Paul McMullan passing around Aidan Nesbitt before McMullan whipped a cross into the box that Danny Mullen headed in at the back post to make it 2-2. A very frustrating goal to lose and one that could have been avoided had the ‘Ton defence listened to the shouts from Nesbitt to assist with the extra man on the free-kick.

Tomorrow’s game will be available to watch on DeeTV for £12.50.

You must register a username and password before you can purchase the match.

Please ensure that you also bookmark this site as you will return to watch the match on this platform.

The link to the PPV site is – https://ppv.dundeefc.co.uk/register

If you require any technical support or help logging in, please contact live@dundeefc.co.uk