Morton and Dundee United go head to head at Cappielow tonight in the second instalment of a hat-trick of competitive clashes spaced over the course of just six days.

The Ton and Ray McKinnon’s Tangerines could not be separated at Cappielow on Saturday after Kudus Oyenuga’s headed opener was cancelled out by Blair Spittal to ensure the final game of the regular league campaign would end in stalemate.

The clubs will now will do it all over again in Greenock in tonight’s Premiership promotion play-off first leg before facing off at Tannadice on Friday to decide who will face Falkirk in the semi-finals.

Jim Duffy’s men can draw confidence from the weekend draw considering they took the opportunity to rest a number of players while their opponents were at full strength as they attempt to secure a positive result to take to the City of Discovery.

“It will be good to finally get involved in it. It’s an interesting challenge for the players because it’s one they’ve not faced before, and I think that’s always good as a player, to come against something new.

“Even though it’s opponents we’re very familiar with, the circumstances and situation is completely foreign to the players, so we’re looking forward to it.

“People mention the ‘what if’ scenarios, but you can’t even contemplate that. It’s a two-legged tie, but you can only deal with the game in front of you.

“For the first 75 to 80 per cent of the game, you just have to play and see where you are, if you have to chase the game or how to manage the game.

“But if you start thinking about Friday before you’ve dealt with Tuesday, you’re liable to lose focus and Friday might not be as relevant then, so for us it’s about putting everything into tonight and seeing what the situation is after that.

“We’ve played Dundee United fives times already this season and they games have always been very competitive and relatively even. From that both sets of players will be familiar with each other.

“The challenge for the players is to try and handle the occasion – the wee bit of nerves and tension – and find a top-class performance, and if they do that then we’re in with a shout.”

Manager Jim Duffy has received positive news from the treatment table after Ross Forbes and Ricki Lamie both recovered from knocks suffered on Saturday in time to declare themselves fit to face Dundee United tonight.

However, long-term absentees Jai Quitongo and Conor Pepper are joined on the sidelines by goalkeeper Bryn Halliwell (thigh) and Lee Kilday (ankle).

Striker Kudus Oyenuga spent two seasons at Tannadice between 2013 and 2015, making one first-team appearance for Dundee United before going out on loan to Boreham Wood and Cowdenbeath, and scored against his former side on Saturday.

Morton and Dundee United shared a 1-1 draw at Cappielow on Saturday and thereby ensured that the clubs would meet again in the quarter-finals of the Premiership promotion play-offs.


Entry is pay at the gate and admission prices are: 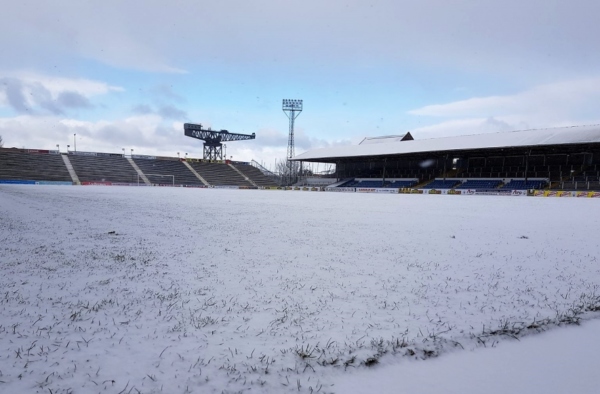 We would like to advise supporters of our office opening hours here at Cappielow over the festive period:23 December…
News 04/10/2019

Greenock Morton Football Club are proudly supporting Show Racism the Red Cards Fortnight of Action. Many of you will…