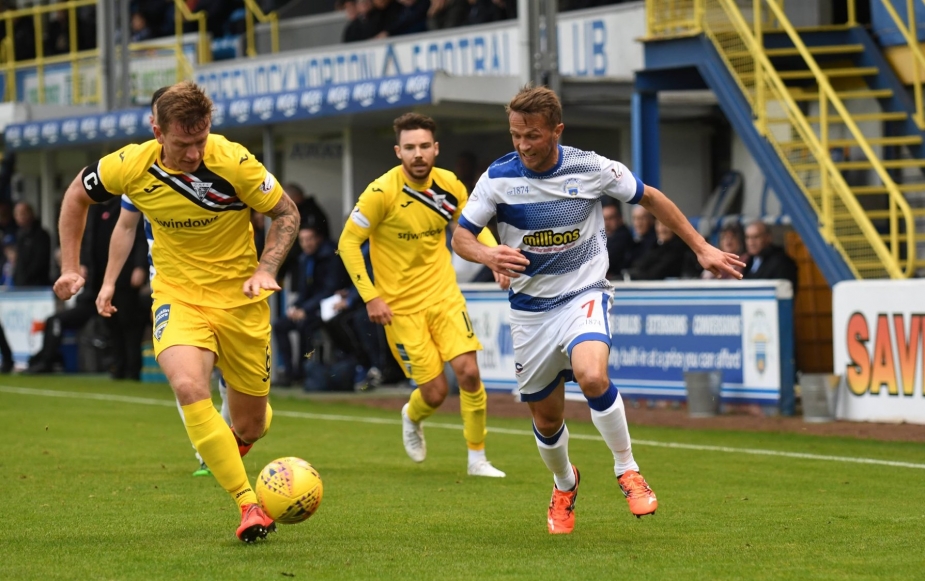 The Ton’s previous league match ended in a 1-0 victory over Arbroath last month as Reece Lyon’s early goal proved to be crucial in the match at Cappielow Park. Manager David Hopkin will be hoping his squad can put in a repeat performance and build from their impressive cup win midweek.

Stevie Crawford’s Dunfermline currently sit fourth in the table and go into tomorrow’s match off the back of a 1-0 victory against Ayr United at Somerset Park on Tuesday evening.

10 – The Ton’s top goalscorer Bob McHugh has scored 10 goals this season in 20 appearances.

30 – Bob McHugh is closing in on his 30th goal for the club, the forward has scored 28 goals since arriving in the summer of 2017 and he will hoping to move closer to this landmark with a few more goals tomorrow afternoon.

40 – Midfielder Chris Millar is one goal away from scoring a combined 40 goals over his two spells at Morton.

Goalkeeper Ryan Scully enjoyed two loan spells with the Pars, in 2013 and then 2014. The shot stopper spent the first half of last term at Cappielow before returning to East End Park following his Ton release.

Greg Kiltie enjoyed a successful spell at Morton during the second half of last season where he became a fans’ favourite with his goal scoring antics as he scored 6 goals in his brief time at the club. The Kilmarnock loanee returned to his club in May before departing again on a temporary transfer to Dunfermline in the Summer until the end of the season.

A last gasp equaliser from Morton club captain Jim McAlister saw the Ton grab a draw at Cappielow as the midfielder scored his first goal since his return to the club for his second spell.

The draw put Morton two points behind Dundee, who are in the playoff places in this year’s Ladbrokes Championship league table as the first quarter of the season drew to a close.

It was Dunfermline who took the lead  on 87 minutes when Ryan Dow’s effort on goal was caught then dropped by Sam Ramsbottom to allow Andy Ryan the chance to sneak in and finish the ball into the net to give the Pars the lead late on in the game.

But a late push from Morton saw the Ton get a late leveler on 90 minutes as a cross in the box from Kyle Jacobs was headered back across goal by Stephen Welsh which found Jim McAlister who sent it home give the Ton what could be an important point later on in the season.

Morton fans will be housed the East Stand.

Fans under the influence of alcohol will not be admitted and all bags will be searched, with random-persons searching undertaken. Surfing flags are not permitted and other flags will be checked to ensure that they are not offensive or derogatory.

Accessible matchday tickets can be reserved via Dunfermline Athletic’s ticket office on 01383 745909.

In terms of parking, there are six dedicated parking spaces for disabled away fans behind the East Stand, available on a first come, first served basis. Enter the main car park via Leys Park Road and follow the stewards` directions.

Any child under the age of 12 who brings a donation to support tomorrow’s foodbank appeal at East End Park will receive a free match ticket. Simply take your donation to the away ticket office and swap it for a ticket.

Dunfermline Athletic have launched the appeal which will be taking place before tomorrow’s game and have asked both home and away fans, if they can, to donate any food items before kick-off.

Greenock – Dunfermline Town station via Glasgow Central, Queen Street, and Haymarket Edinburgh. Journey time varies from 2 hours, 30 minutes to 3 hours 15 minutes. There is a 15-minute walk from the station to the ground.


The Gourock Morton Supporters’ bus leaves the Royalle Club in Gourock at 12pm. Prices are £14 for adults and £12 for concessions.

The Greenock Morton Supporters Club leaves the club at 12.30pm. Prices are £11 for adults and £9 for concessions.

The Port Glasgow Morton Travel Club will leave the Sutherland Bar at 12.30pm.