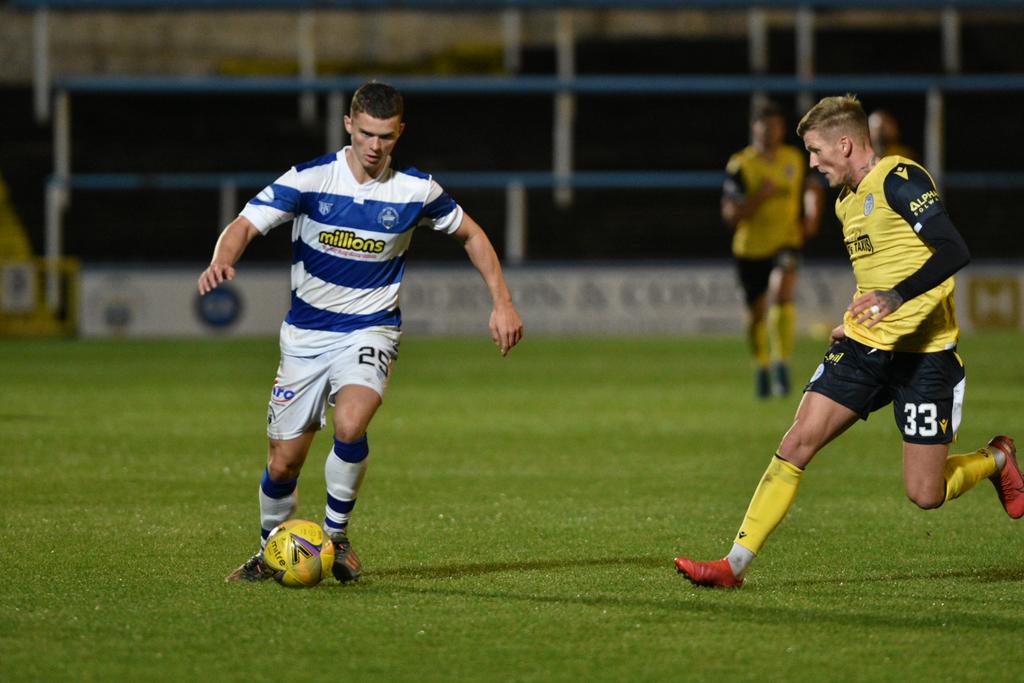 Morton welcome Queen’s Park to Cappielow tomorrow evening in their second group fixture of the Betfred Cup following the 2-2 draw with Queen of the South last Tuesday night.

It was the first competitive game since March for David Hopkin’s side last week and the gaffer will be pleased on how his team, including four debutants, performed in 90 minutes. The Ton missed the opportunity of a bonus point in Tuesday’s opening fixture after losing the penalty shootout and they will be looking to bounce back and get all three points on board against The Spider’s tomorrow evening.

A win tomorrow night will put the Sinclair Street side in a strong position within the group before the crucial double header against St Mirren and Partick Thistle in November.

Ray McKinnon’s Queen’s Park are on the road again following a 2-0 defeat against Partick Thistle at Firhill on Saturday and they will be hoping they can come away from Greenock tomorrow evening with a positive result.

1 – Aidan McAdams, Rabin Omar, Josh McPake and Ross Maciver all made their competitive debuts for Morton last week against Queen of the South

2 – Sean McGinty’s last minute equaliser in the 2-2 draw against Arbroath in March was the last competitive goal which Morton scored before the season was cut short. The defender also scored the first competitive goal for the club since the return of football last week after his opener against Queen of the South.

Forward Bob McHugh signed for the Spiders following his departure from Cappielow in the Summer. The 29-year-old spent three seasons with the club scoring 30 goals in 103 appearances.

Defender Peter Grant spent the first half of last season as a Ton player before joining Queen’s Park in January this year. During his time at Cappielow he made 24 appearances and scored 2 goals.

Fellow defender Lee Kilday joined Queen’s Park in July this year following a spell with Queen of the South last season. Kilday signed for Morton at the beginning of the 2014/15 season after coming through the ranks at Hamilton. He spent five seasons here scoring 8 goals in 157 appearances and was part of the squad that lifted the League One trophy in May 2015.

Winger Ross MacLean signed for Queen’s Park from Motherwell in January this year following a loan spell with Falkirk. The 23-year-old had a brief spell on loan from The Steelmen here in 2018 making 21 appearances and scoring 2 goals.

At the same time that Lee Kilday and Bob McHugh joined Queen’s Park, Michael Doyle put pen to paper on a deal in July. Doyle spent two seasons at Cappielow scoring 2 goals in 84 appearances, he was part of the Betfred Cup semi final squad against Aberdeen in October 2017 and departed the club for Queen of the South in 2018.

Ray McKinnon started the 2018/19 campaign here as manager at Cappielow before taking the reins at the Falkirk. He then became manager at Queen’s Park in January this year following his departure from Falkirk in November 2019.

Morton scored twice in the last five minutes to stage a stunning fightback that saw them salvage a 2-2 draw with Queen’s Park before claiming a bonus point on penalties in the Betfred Cup tie at Cappielow back in 2017.

After dominating the entirety of the first half, the Ton found somehow themselves trailing by two goals with just nine minutes remaining due to goals from Bryan Wharton and ex-Cappielow hitman Thomas Orr.

But Bob McHugh gave his side hope by pulling one back on 85 minutes before Darren Barr dramatically rescued a point by volleying home the equaliser in the third minute of stoppage time.

Tomorrow night’s game will be available to watch live for £10 on ‘TonTV.

Supporters are asked to purchase in advance where possible to avoid any excessive online traffic before the game kicks off.

All home fixtures will be available via our new dedicated ‘TonTV website, tv.gmfc.net.

There will be a test stream available this evening, Monday from 5pm until 9pm to allow you to check streaming on your chosen device. Please allow the stream to run for five minutes or more to check that you have no interruptions and can hear the sound of the audio track.

Three of our Under-17 starlets have signed two-year, full-time development contracts as they make the step up to Darren Barr's development…