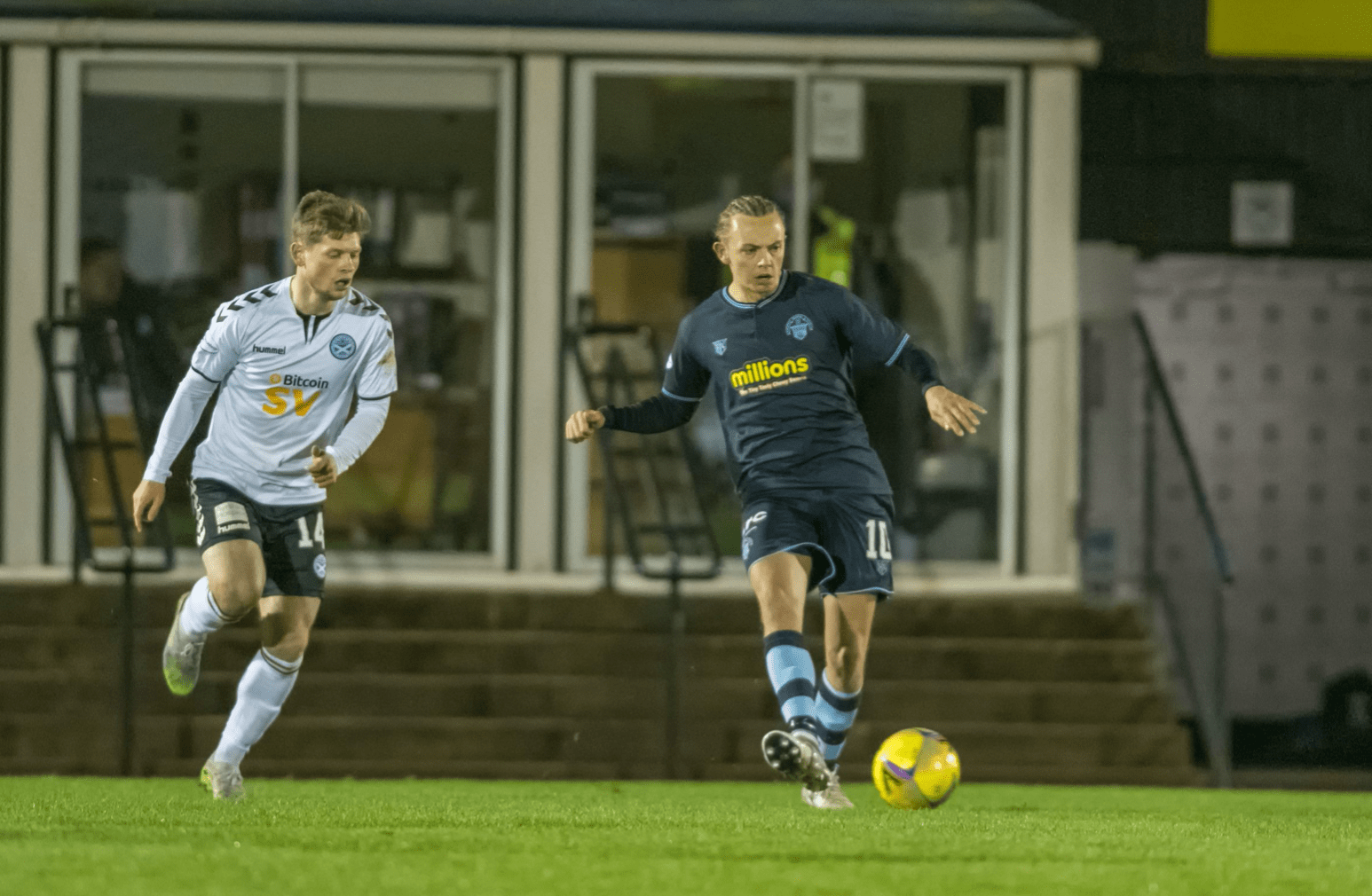 Morton concluded 2020 on Tuesday night with a 1-1 draw against Ayr United at Somerset Park in the Scottish Championship.

Anton McElhone made one change to the side that had defeated Queen of the South on the 19th December with Aidan Nesbitt coming in for Josh McPake who had sustained an injury in training on Monday morning.

Prior to kick-off there was an impeccably-observed minute’s silence in memory of legendary Scottish football manager Jim McLean who passed away on Boxing Day.

The ‘Ton were on the offensive right from the start and it was Nesbitt, himself, who was targeted in the opening minutes when he was twice felled by strong tackles; the second of which, on the halfway line, produced a unison of outrage from all of his team-mates.

Morton were attacking down the flanks and, from one such move in 25 minutes, the opening goal arrived.

Nesbitt had jinked his way into the box on the left-hand side before lobbing a ball into the danger area. The home side struggled to deal with it and Cameron Salkeld pounced. In an effort to create space he went beyond defenders only to be brought down by Ayr Player/Manager Mark Kerr who was making his first start of the season.

From the resultant penalty, Nesbitt stepped up and fired a confident drive into the right of the net beyond the clutches of home custodian, Viljami Sinisalo.

The visitors continued to attack but were pegged back by the concession of a free-kick in the 37th minute.

The set-piece was delivered deep to the back post and as Aidan McAdams stretched to parry away a header, the ball bounced kindly for Luke McCowan who tapped it home from inside the six-yard box. It was the Honest Mens’ first real attempt on goal.

The ‘Ton bounced back and going once more on the attack, Lewis Strapp tried an ambitious strike from all of 30 yards after a headed clearance but it cleared the bar and the teams headed in at the interval tied at one apiece.

Ayr raised the tempo in the opening moments of the second period with a couple of attempts at goal whilst Nesbitt replied with a driven free-kick that was clutched under the cross bar by Sinisalo.

The striker also tried a shot from open-play that sliced wide before great work from Strapp down the left and interplay between Reece Lyon and Kalvin Orsi resulted in an opportunity for Salkeld but, having worked the ball onto his left-foot, the Geordie couldn’t keep his shot down.

Both sides made substitutions as the game started to even out but no more goals were recorded and the outcome was a one-all draw.

Interim Manager, Anton McElhone was satisfied with both the strong performance and result, pointing out to the Club website, in his post-match interview, that it meant that Ayr United had not defeated Morton throughout the calendar year and that the team was carrying momentum.

Next up for the ‘Ton will be the opening fixture of 2021 on Saturday, when they go to Alloa to take on Athletic in the Scottish Championship