Magnificent Morton recorded a resounding 4-1 win over Ayr United in front of the BBC Alba cameras at Somerset Park last night thanks to a brace apiece from Ross Forbes and Gary Oliver.

The memorable victory – the Honest Men’s heaviest at home this season – saw the Ton stretch their winning run to four consecutive matches whilst moving them to within three points of Dundee United in second place.

Yesterday’s fixture represented a return to league duty following last week’s Scottish Cup victory against Falkirk, and manager Jim Duffy made two changes to the team that bested the Bairns.

After being forced to sit out due to featuring earlier in the tournament for St Mirren, Lawrence Shankland was restored to the starting line-up as part of a recalibration that saw Mark Russell drop out and Aidan Nesbitt move back to left midfield.

In the other change, suspended midfielder Jamie Lindsay, who went through the disciplinary points barrier against Raith Rovers, was directly replaced by Michael Tidser.

The transition was seamless, though, and the Ton made a sensational start to the match, lighting up a dreary night in Ayrshire with a dazzling opening half-hour.

Midfielder Forbes has been a talisman for the team this term, and he showed his intent within the first four minutes with a stinging strike that goalkeeper Greg Fleming managed to pat wide without knowing an awful lot about it.

The 27-year-old is blessed with an ethereal left foot, and he went for placement rather than raw power with his next effort to break the deadlock on 11 minutes.

Receiving a pass from Michael Doyle wide on the right, Forbes initially bobbed and ambled languidly in possession before quickly checking outside onto his stronger foot and whipping a shot around Fleming’s dive and inside the left-hand post.

It was an expertly executed effort that seemed to be heading well wide before bending around the goalkeeper and back in just in time to nestle on the inside of the net.

Forbes completed his brace eight minutes later to double the Greenock outfit’s advantage as well as taking his tally for the season into double figures as made it 10 for the campaign.

It was another well-crafted move in which the irrepressible Aidan Nesbitt fizzed a cross from the left into Oliver. The frontman cushioned a delicate touch into the path of Ton’s top scorer, who volleyed into the ground to send the ball looping over Fleming.

But even that move was surpassed by the build up to the visitors’ third goal, scored by Oliver right on the 30-minute mark at the culmination of a 16-pass move that started with a trademark Andy Murdoch interception in the middle of the park.

The ball transitioned through Murdoch, Shankland, Michael Tidser, Doyle, Lee Kilday, and Oliver – with most involved more than once – as it was recycled and switched from left to right and back out to the left and full-back Ricki Lamie.

The defender then took the bull by the horns, surging forward into the space afforded him and slipping a disguised, angled pass into the frontman’s feet.

Oliver outfoxed two Ayr defenders with tidy drag back to open up the space for a shot with his left foot, which he confidently rifled past Fleming low to his right.

So dominant were Morton at this stage, the question on most observers’ lips must have been to ask how many they would score rather than if Ayr could mount a comeback.

But Ian McCall’s men managed a momentum shift on 36 minutes when midfielder Jamie Adams fastened onto a Nicky Devlin pass as he burst into the box as Ayr found themselves with an overload on the left and pushed the ball past Derek Gaston.

The Honest Men ended the half in the ascendancy, and had Gaston not brushed Gary Harkins’ stinging daisycutter wide with a fingertip, the game would have been flipped on its head.

They continued to push for a goal after the restart, and local lad Harkins pressed the Ton custofian into action again on 54 minutes, meeting Devlin’s clipped cross with a header that the well-positioned shot-stopper gratefully grasped.

But any hopes of a fightback were put to bed on 65 minutes when another slick exchange involving Doyle and Forbes ended with the right-back crossing for Oliver to force over the line ahead of two defenders and net his eighth of a fine maiden season.

Besides another fantastic one-on-one save from Gaston to deny Craig Moore – fortunate to still be on that park after a reckless early challenge on Kilday – that recalled his block against Falkirk seven days earlier, the match played out without major incident.

The travelling support, officially announced as numbering 420, took centre stage and went through their full repertoire, producing old favourites from the songbook celebrating the likes of Brian Wake and Dougie Imrie as well as the current squad.

Cappielow gaffer Duffy was serenaded by the away fans and asked for a wave, twice, to which he responded despite his obvious focus on the action.

But perhaps the most salient of songs to ring out considering the result and performance that had unfolded was the warning to the team sat immediately above their heroes: “Dundee United, we’re coming for you!” 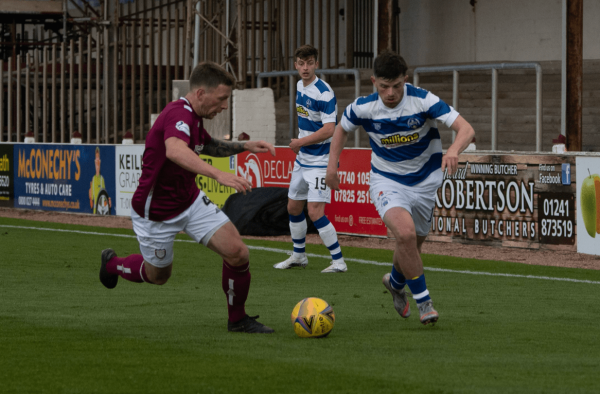