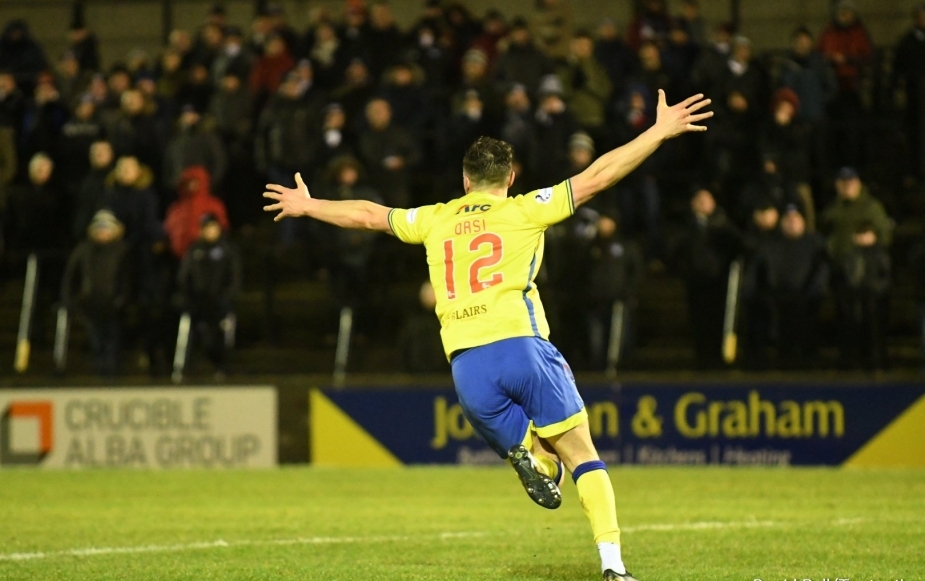 The Ton made a huge statement of intent in the league with their 2-1 victory over Ayr as goals from Kalvin Orsi and Nicky Cadden gave Morton a great win.

David Hopkin’s men now remain unbeaten in 2020 in the league with the team now heading up the table in 6th place following Tuesday night’s result.

The game began with little to no chances as Stephen Kelly had a free kick blocked for Ayr on 6 minutes which was eventually cleared by Morton.

Sam Roscoe was unable to find any teammates from a cross on 14 minutes when defending from Reghan Tumilty forced Roscoe to send the ball sailing out for a throw-in over the opposite side.

But around 10 minutes later, it would be Ayr United who would break the deadlock as Connor Malley sprinted through on goal and chipped the ball over Danny Rogers to send Ayr United ahead at Somerset Park.

Aidan Nesbitt almost got the equaliser on 27 minutes when Cameron Blues collected the ball around 20 yards out and sent an effort towards goal which deflected and almost broke to Aidan Nesbitt but Ross Doohan was able to collect the ball before Nesbitt could get there.

However, the continued pressing of the Ton paid off on 29 minutes as a cross in from Nicky Cadden was only headered clear by Ayr as far as the waiting Kalvin Orsi who curled the ball into the bottom right corner to give Morton the equaliser.

As the second half got underway, it was Morton who had the first chance as a cross in the box found Sean McGinty who’s header went wide of the post.

The Ton started the second half well with another chance following to the Cappielow side on 51 minutes when Reghan Tumilty had an effort from around 25 yards out which forced Ross Doohan to dive but the effort went inches of the post.

An excellent pass through from Nicky Cadden on 57 minutes found Kalvin Orsi who ran through on goal and shot towards goal from close range but a sliding tackle from the opposition defender denied Kalvin Orsi of his second of the day.

Ayr missed a big chance to go ahead on 61 minutes when a cross in the box met Michael Moffat who was unable to direct his chance towards goal as it sailed over the bar.

Nicky Cadden continued to play some tremendous crosses in the box as another great cross found Sean McGinty from a corner on 62 minutes but the centre half headed downwards and into the goalkeeper’s hands.

Danny Rogers put in a tremendous performance against the Honest Men as a save on 68 minutes from around 25 yards out from Stephen Kelly was denied by the safe hands of Rogers.

Morton showed a real intent in the second half as they continued to press for a winner when Reghan Tumilty’s effort on 71 minutes was palmed out and looked to have been heading to Luca Colville but the Ayr defender was able to get there before Luca and cleared away from danger.

But the Ton were finally rewarded for their impressive second half performance as a divine lobbed pass through from Lewis Strapp on 74 minutes found Nicky Cadden who was able to nip the ball under Ross Doohan’s legs from a very tight angle to send Morton ahead.

Ayr created themselves a chance on 76 minutes as a cross to the back post found the waiting Sam Roscoe who’s header went narrowly wide of the post, to the delighted of the travelling Ton supporters.

Once again, Danny Rogers continued to make important saves in the match as Scott Tiffoney’s effort  from close range on 86 minutes was denied by Rogers.

Craig McGuffie was unlucky not to grab a goal against his former club on 89 minutes when a sublime cross in the box from Reghan Tumilty met the head of McGuffie who couldn’t direct his chance towards goal.

As the full time whistle was blown, the travelling support erupted as the Morton players and staff thanked the supporters for their backing in what was a huge win for the Ton.

With the run-in approaching and their unbeaten run in 2020 continuing, this good run of form has came at the perfect time for the Ton as they hope to continue this form towards the end of the season.

Our table-topping Under-20s look to maintain their place at the Development League West summit when they host Clyde at Cappielow tonight,…