Gary Oliver made his return to action with a 74-minute run-out in last night’s Development League West fixture against Clyde at Broadwood.

The frontman, who has netted eight goals in his maiden campaign with Morton thus far, suffered a knee injury away at Queen of the South at the beginning of February.

After five weeks on the sidelines, he was deemed fit enough for a place on the bench for Saturday’s home win over the Doonhamers.

Oliver was an unused substitute, however, and so this appearance will have proven valuable as the Ton edge towards the final quarter of their Ladbrokes Championship campaign.

Although the frontman made a welcome return, the Under-20s suffered just their second loss of the league season, going down to a 2-1 defeat to the Bully Wee that leaves them nine points off Queen of the South at the top of the table.

Andy Millen’s men actually took the lead on the night when 17-year-old midfielder Jack Purdue got on the end of Jon Scullion’s low cross from the left and stabbed into the net on 33 minutes.

Oliver himself was denied a goal by a magnificent clearance by defender Jamie McPhee, who recovered to clear off the line after the Ton striker had rounded Mark McMillan and rolled the ball towards the target.

Clyde restored parity just seven minutes after falling behind. Star man Ronan Sweeney was the scorer, stooping to meet an inswinging cross with a diving header that beat Jamie McGowan low to his left.

And the hosts turned the game on its head by edging in front just after the hour, Aaron Miller latching onto a slide-rule pass before rifling into the bottom-right corner with his right foot.

There would be no further scoring as Clyde sprung a shock, with their celebrations confirming the Ton teens’ status as a real scalp at this level. 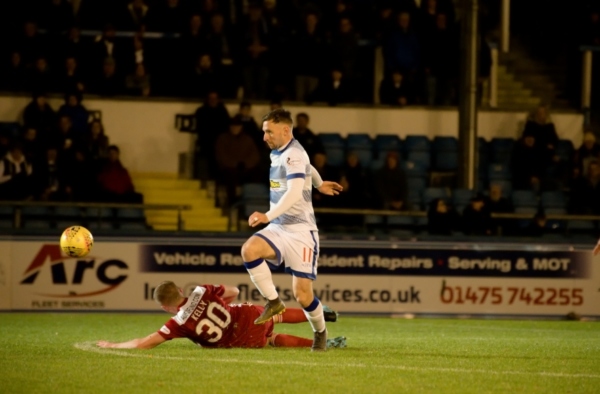