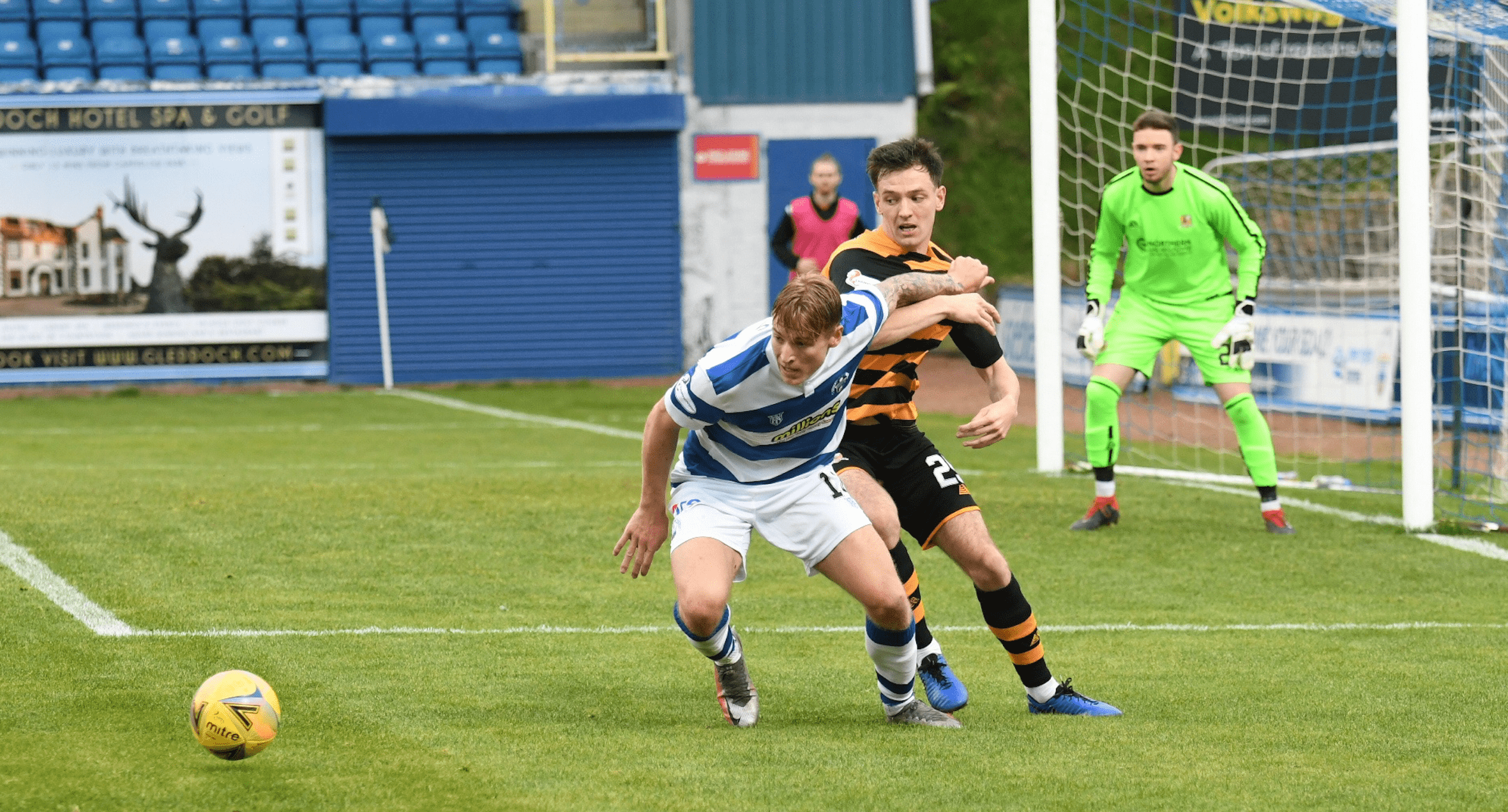 Manager David Hopkin made seven changes to the side that started against Queen’s Park on Tuesday night and club captain Jim McAlister came back into the squad, making a landmark 350th appearance for the club.

Peter Grant’s Alloa had four former ‘Ton players in their squad with Scott Taggart, Robert Thomson and Alan Trouten all in the starting line-up and defender Andy Graham on the bench.

The Sinclair Street side had the better amount of chances in the first half starting with Josh McPake on 5 minutes. The midfielder picked up the ball from 25 yards out and pulled the trigger, but his effort went just wide to the right.

Seconds after, there was a penalty claim from the visitors as Lee Connelly appeared to collide with Markus Fjørtoft in the box, but referee Alan Newlands rejected the claims and then showed a yellow card to Peter Grant for his touchline protests.

The ‘Ton’s first goal of the 2020/21 league campaign arrived on 10 minutes and came directly from a superb counter-attack move after the home defence cleared an Alloa free-kick. The clearance found Josh McPake on the half-way line and he showed great strength to work the ball further forward up the park before slotting in Cameron Salkeld who hit a first-time shot under the advancing Alloa custodian Reece Willison to make it 1-0.

McPake continued to cause all sorts of problems for the Wasps on the left and he had another great chance on 19 minutes, cutting inside the defence but his long-range effort went over the bar.

The 19-year-old, on loan from Rangers, continued to look for his first goal for the club on 33 minutes after great work from Kalvin Orsi who won the ball back before playing it into McPake’s path. His shot flashed across goal and just wide of the post.

Lee Connelly went close to equalising for the Wasps on 34 minutes, creating space on the left but thankfully his curling effort did not cause too much trouble for Aidan McAdams and went wide of the post as the Sinclair Street side  headed into the interval with the one-goal advantage.

The second half started and the ‘Ton had a massive chance to double their lead on 55 minutes from a Robbie Muirhead corner that was met by the head of Brian McLean a few yards out but it was too high and went over the bar.

Alloa were reduced to 10 men on 60 minutes as Steven Hetherington was shown a second yellow card and sent off for pulling down Josh McPake about 40 yards out from goal.

The ‘Ton immediately seized the initiative with the extra man and began to press for a second. Kyle Jacobs went close on 62 minutes after meeting an Aidan Nesbitt corner with his head, but he couldn’t get it on target, and it went over the crossbar.

A huge penalty appeal for the ‘Ton came on 73 minutes after Josh McPake appeared to be taken down by Scott Taggart in the box. However, Alan Newlands thought otherwise and showed McPake a second yellow card for simulation as David Hopkin’s side were reduced to 10 men.

It took a few minutes for the Greenock outfit to compose themselves following the red card and Alan Trouten nearly netted an equaliser for Alloa on 78 minutes, hitting the crossbar with a header after a delivery into the box.

It was clear that the visitors had moved from their passing game into more direct tactics as they launched balls into the penalty area in an effort to test the ‘Ton backline.

Another massive chance for the Wasps to get level came on 75 minutes as Liam Buchanan missed an inviting header from just a few yards out. As the final 10 minutes of the game arrived, David Hopkin encouraged his side to get further up the pitch and see out the game.

Experienced front man Trouten went close again right at the death, hitting a free-kick on the edge of the box but his effort went over the bar.

A solid defensive display in the second half, backing up some adventurous attacking play throughout, ensured a win and three points for Morton on opening day and David Hopkin was satisfied for his team to get off to a winning start.

Attentions now turn to our first away trip of the season with next week’s Scottish Championship game against Dundee at Dens Park.