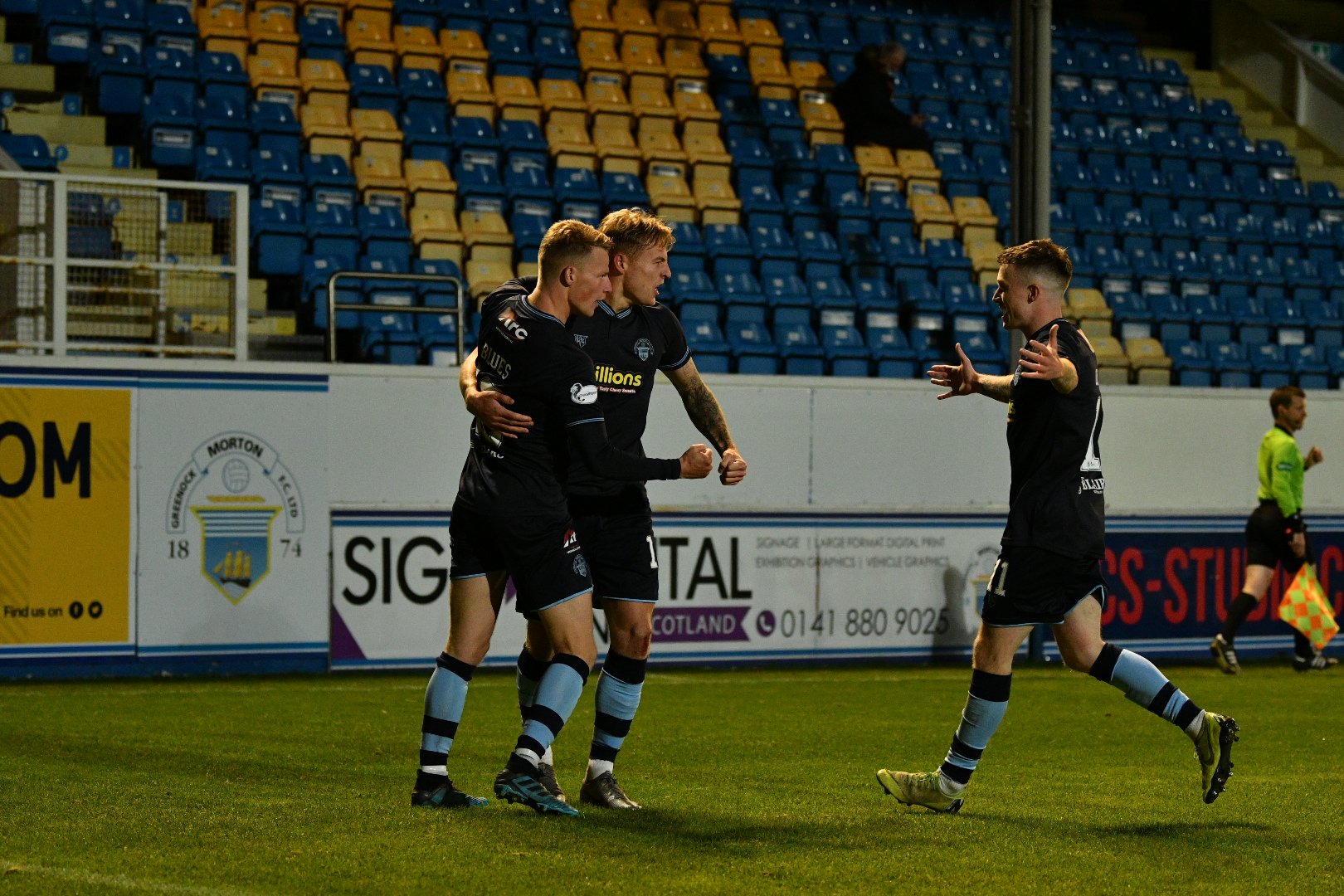 Cameron Blues’ first ever goal for the club was enough to ensure Morton all three points against Queen’s Park at Cappielow in last night’s Betfred Cup group fixture.

Manager David Hopkin made a total of nine changes to the side that drew 2-2 with Queen of the South last Tuesday. These changes included giving competitive debuts to defenders Michael Ledger and Markus Fjørtoft.

The visitors had the first real chance of the game on 6 minutes after a David Galt delivery into the box was met by the head of Will Byngham but it fortunately went just wide of the post and out for a goal kick.

Just a minute later up the other end of the park, the Ton would have their first chance of the night to open the scoring on 7 minutes. Luca Colville received the ball outside the box and pulled the trigger on a shot which ricocheted off a Queen’s Park defender forcing William Muir to make a strong save to this left.

There was a penalty claim for Queen’s Park on 8 minutes as Thomas Robson went down in the box, but referee Gavin Ross did not look interested in the protests and waved play on.

The Spider’s had another chance on 12 minutes as Grant Gillespie picked up the ball 25 yards out, dribbled past a few Ton players and went for goal only for his shot to deflect and go wide of the post.

The Ton went close on 35 minutes as Cameron Salkeld was brought down for a free-kick just outside the box. Robbie Muirhead stepped up to hit but his effort went just over the bar as the Sinclair Street side were starting to get further forward.

There was some great build up play by Morton on 40 minutes and a chance for Cameron Blues nearly had the Ton leading before the half-time interval. Gary Oliver played through Robbie Muirhead to deliver the ball into the box from the left and the ball was cleared out to Blues on the edge of the box but again, another deflected shot went wide of the post and out for a corner.

Almost instantly on 41 minutes Gary Oliver had another great chance after working a nice one-two with Luca Colville, driving their way into the opposition box. The move ended with Oliver hitting a low driven shot about 10 yards out which goalkeeper Muir saved down to his right.

Despite a few chances for both sides the half would finish goalless and the Ton would come out to the beginning of the second half and change the game.

The Ton’s patience was rewarded early in the second half as the deadlock was broken on 51 minutes. A great diagonal ball out to the right by Sean McGinty found Cameron Salkeld who exchanged a number of passes with Gary Oliver before working the ball into the edge of the box. Oliver held it up well before finding Cameron Blues who hit the ball first time and into back of the net for his first ever goal for the club.

There was some confusion on 68 minutes as Queen’s Park were awarded a free kick just outside the box and during the stoppage of the free kick a substitution was made by The Spider’s. Thomas Robson came off the park but Brody Paterson had not entered the field of play to replace him yet but the set piece had already been hit by former Ton player Bob McHugh and was saved by Aidan McAdams. However it then became apparent that the free-kick was hit before the substitute had entered the field of play and that Queen’s Park only had 10 players currently on the pitch but referee Gavin Ross rejected the claims of a retake and restarted the game with a throw in.

Luca Colville had a great chance in injury time to double the Ton’s lead after a great counterattack ended with the midfielder having an effort from around 25 yards out, but his shot went just over the bar.

The Ton will be pleased to get three points in the group and their first competitive win of the season ahead of the crucial double header against St Mirren and Partick Thistle next month.

With the short hiatus in the Betfred Cup attentions now turn to league duty on Saturday with the opening Championship fixture against Alloa Athletic at Cappielow.

A pitch inspection has been planned at Bellsdale Park for 12.45pm today ahead of tomorrow's William Hill Scottish Cup third…
News 22/11/2018

Johansson: Players must be up for the Cup