Morton and Dundee United shared a 1-1 draw at Cappielow on Saturday and thereby ensured that the clubs would meet again in the quarter-finals of the Premiership promotion play-offs.

The Ton and the Tangerines will do it all over again in Greenock in tomorrow night’s first leg before facing off at Tannadice on Friday to decide who will face Falkirk in the semi-finals.

Jim Duffy’s men can draw confidence from this past weekend’s draw ahead of the big double header considering they took the opportunity to rest a number of players while their opponents were at full strength.

Although the Sinclair Street had only pride to play for with their league placing decided, Ray McKinnon’s men could still have claimed second spot and avoided the quarter-final stage of the play-offs.

With they took the game to the Ton for the most part, spending the majority of the first half firmly on the first foot as they attempted to gain the result that could potentially see them oust the Bairns from the runners-up spot.

Goalkeeper Bryn Halliwell was named in the starting line-up for his second Morton debut following a spell with the club back in 2009, and he was given a baptism of fire on his return to senior football.

On 14 minutes, he had to look alive to snatch a Thomas Mikkelsen header out of the air right in front of his own face after the Dane met Tony Andreu’s outswinging corner.

The 36-year-old was then forced plunge forward to scoop up under his chin after Cameroonian midfielder Wato Kuate took a speculative shot from distance.

Morton started to force their way back into the game around about the 20-minute mark, and front pairing of Jon Scullion and Kudus Oyeunga combined to test visiting goalkeeper Cammy Bell for the first time.

Scullion did well to steal possession in the middle of the park and then set Oyenuga clear down the left. The forward did well to check inside a challenge before firing off a firm strike that stung the shot-stopper’s palms.

The Scotland cap was then forced to make another important intervention, diving to claim the ball ahead of Oyenuga after Michael Doyle delivered a dangerous low cross from the right.

It was, in truth, a brief interlude in a half understandably dominated by Dundee United, and the Ton survived three close shaves in the space of nine minutes.

On 28 minutes, Mikkelsen sent a glancing header just wide of the left-hand post before clipping the post with a whipped shot from the edge of the area that squirmed under Halliwell’s body.

They went closer still with the third attempt, PFA Scotland championship Team of the Year member Andreu crashing a swerving drive off the face of the crossbar shortly before the break.

Morton survived, though, to get in at half-time on level terms before coming out and taking the lead through former Dundee United forward Oyenuga seven minutes into the second half.

Mark Russell and fellow academy product Lewis Strapp, who impressed in his second successive start, combined down the left before the former picked out the Englishman with a teasing cross that he did superbly well to steer inside the right-hand post.

The lead lasted just 10 minutes, however. Andreu somehow managed to dig out a pull-back to find Blair Spittal unattended deep inside the home box, and the midfielder then slotted a left-footed finish beyond Halliwell into the net.

In what would be his final contribution of the afternoon, Halliwell made a brave stop to keep the sides on level terms. He had already been struggling with a thigh complaint from the first half and made way for 20-year-old net minder Jamie McGowan.

It was the second injury blow for the hosts, with Ross Forbes having earlier made way for Michael Tidser after taking a knee to the small of the back early in the second half.

McGowan, making his first top-team appearance this term, played his part in claiming the point, making a hat-trick of vital interventions in the closing stages.

First, he showed impressive reactions to shoot his left foot and repel Spittal’s angled drive and then did well to punch clear under pressure late on before scooping out the follow up out at his top left.

Yet Morton came within a stunning stop of claiming the victory when Bell brushed sub Aidan Nesbitt’s swept shot onto the right-hand post with his fingertips in the final minute of normal time.

The final whistle blew shortly thereafter to bring down the curtain on the 2016/17 league campaign and begin the build to the play-off encore in the days to come. 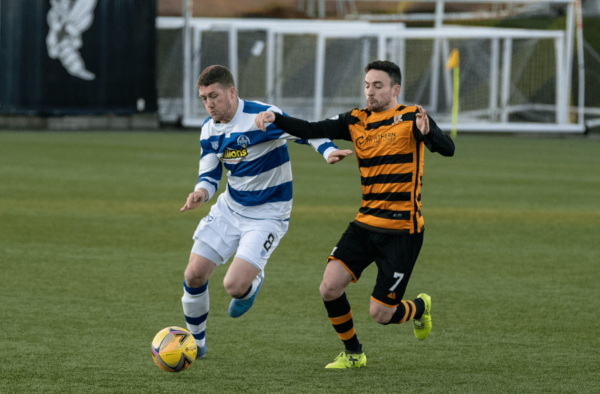