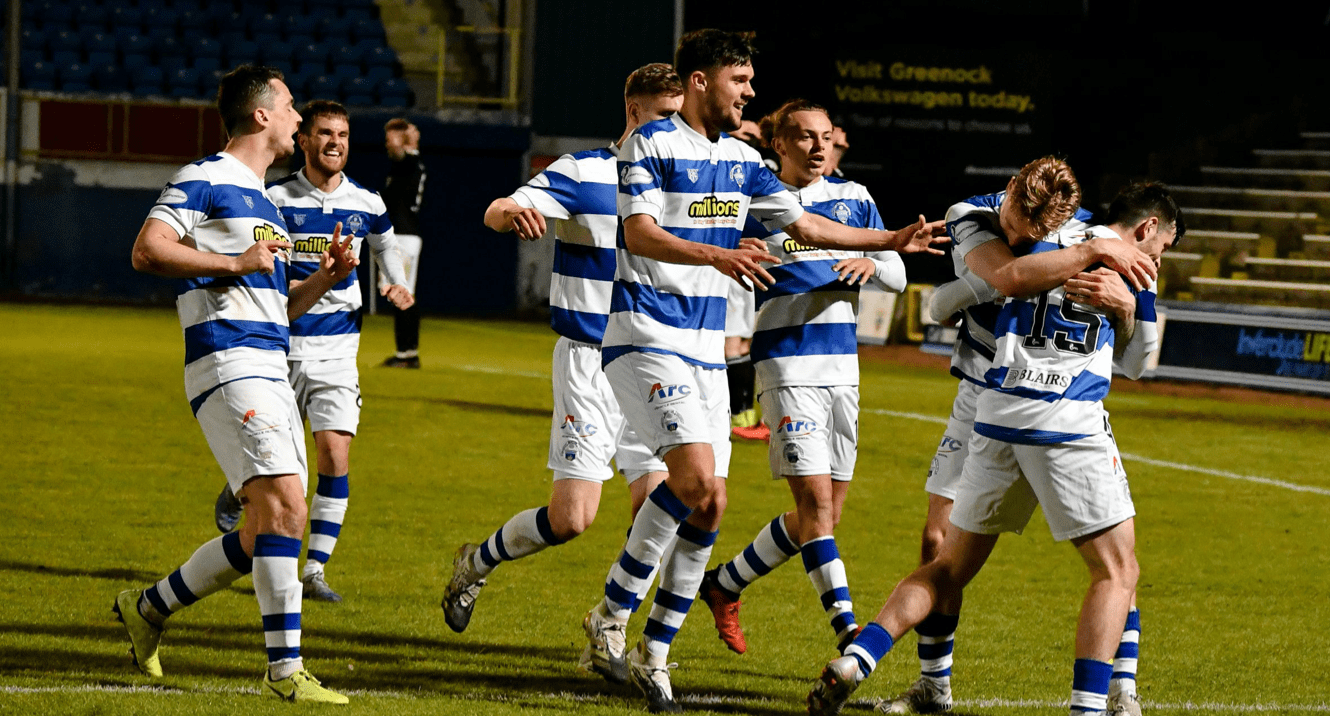 Morton secured their place in the Championship play-off final last night after Craig McGuffie netted in the final few moments of extra time to send his side through on aggregate.

The ‘Ton headed into the second leg after losing the first 2-1 on Saturday and manager Gus MacPherson made four changes to his team with Chris Millar, Cameron Blues, Robbie Muirhead and Cameron Salkeld all coming in for Michael Ledger, Aidan Nesbitt, Kalvin Orsi and Craig McGuffie.

And much like Saturday’s game, the Greenock side were fired up from the first whistle and they opened up the scoring on 5 minutes. Cameron Salkeld was making his presence known on his return to the starting eleven and slotted through Robbie Muirhead who’s shot at goal fell to Gary Oliver to put the ball into the back of the net to make it 1-0.

A dream start, one that showed signs that there were still plenty of chances to come and the lead was nearly doubled on 17 minutes when Oliver got on the end of a Salkeld cross but his connection deflected just wide of the post to deny him of his second of the game.

The much needed second goal came just a few minutes later though on 19 minutes when Cameron Blues floated a ball into the box that was headed back across goal from Markus Fjørtoft to Cameron Salkeld who headed it in on the line to put the ‘Ton ahead on aggregate.

Stewart Petrie’s men were showing that they were no pushovers and would turn the momentum of the game in their favour by grabbing a goal back on 34 minutes. A cross into the box was headed down to the feet of Russell McLean who blasted it passed McAdams from a few yards out to level the aggregate scoring.

It looked like either team could score with chances coming from both ends of the pitch as the two sides tried to win the tie in 90 minutes, making out for an extremely nerve wracking second half.

Kyle Jacobs had a massive chance to score Morton’s third goal of the game on 78 minutes after he managed to take the ball around goalkeeper Fleming to divert a shot that looked destined to go in until Kerr Waddell make a last minute clearance on the line to prevent a certain goal.

With either side unable to find another breakthrough, the game was set for extra time as MacPherson brought Aidan Nesbitt and Craig McGuffie on to try and find a winner in the additional 30 minutes.

Stephen McGinn was enjoying large spells on the ball as the controlled the majority of the game from he middle of the park, using his experience to create opportunities and he even had an attempt at goal himself on 102 minutes but his long range effort was fired over the bar.

It was clear that the legs were tiring as time went on and it looked like the match would be decided with a penalty shootout until, like many occasions this season, the ‘Ton  the winner in dramatic fashion. Craig McGuffie received the ball out on the left and knocked it through the legs of Craig Johnston before whipping a ball towards goal that caught Fleming out and into the right hand side to give secure a play-off final position.

Morton will now play Airdrie in the play-off final with the first leg at the Excelsior on Tuesday 18 May and second leg at Cappielow on Friday 21 May.