Morton 3-3 Queen of the South

A day of mixed emotions saw Morton go through to the last 16 of the Betfred Cup as a victory on penalties meant Morton would qualify.

On 4 minutes, the game went off the script that Morton was expecting as Queen of the South got an early goal as a cross into the box was met by Connor Murray who forced a save by Sam Ramsbottom however former Morton man Lee Kilday was there to get the goal with claims of offside following the opener.

Morton had their first chance of the game on 7 minutes as Nicky Cadden sprinted down the wing and sent a dangerous ball into the box however no Morton players were able to get on the end of the pass to get the goal.

Aidan Nesbitt had a very close effort on 14 minutes as the playmaker tried to curl the ball around former Morton goalkeeper Robby McCrorie however the ball just narrowly went wide.

A second for Queen of the South was almost on the cards as a Gary Oliver effort on goal hit a Morton defender and looked as though was deflected into the goal however it was not to be as a corner was given.

The needed goal for Morton came on 31 minutes as Nicky Cadden crossed the ball in from a corner and experienced striker John Sutton leaped above all the defenders and finished it off for the equaliser.

At last, Morton were able to take the lead just before half time as Lewis Strapp went on a silky run into the Queens penalty area and was brought down in the box for a penalty.

This set up the opportunity for Nicky Cadden to remain calm and send the ball home beautifully with a lovely chip which sent the goalkeeper the wrong way.

The Ton got their third goal of the game on 56 minutes as a superb ball into the box by Aidan Nesbitt from the right side of the pitch was met by the head of Bob McHugh who sent the ball into the net with precision.

Panic began to run through Morton on 62 minutes as a very unlucky goal came for Queen of the South when a crossed ball from the right side of the box hit the body of Jim McAlister and went by an unexpecting Sam Ramsbottom to give Queens their second of the day as McAlister sent the ball into his own net.

Ex-Morton striker Gary Oliver tried his luck on 71 minutes with a classy outside of the boot effort to try and send it around the keeper but the ball slid just by the post.

A moment no Morton fan would have wanted came on 78 minutes as a calamity in the box and confusion between the defenders and the goalkeeper meant that a scramble gave Callum Semple the chance to score Queens’ equaliser which he capitalised on for the sixth goal of the day.

Cappielow erupted on 88 minutes as it seemed that Morton had scored the winner however the linesman had his flag up for offside and the Ton continued the hunt for the winning goal.

This was shortly followed by the chance for the new referee rules to come into play as David Hopkin was shown a red card and sent to the stands following the introduction of a new law which enables the referee to physically show a yellow or red card to members of the technical area.

As the final whistle was blown, Morton knew that a win on penalties was now needed to send the team through to the last 16 of the Betfred Cup.

With two penalty saves, Sam Ramsbottom redeemed himself knowing he had to prove to the fans as he saved the winning penalty for Morton with a divine save and sent the team on their way to the next round.

Morton will now face Hibernian FC at Easter Road and will be hoping to cause a shock upset and give the fans a great day in the capital.

Gary: I was planning celebration as I stepped up 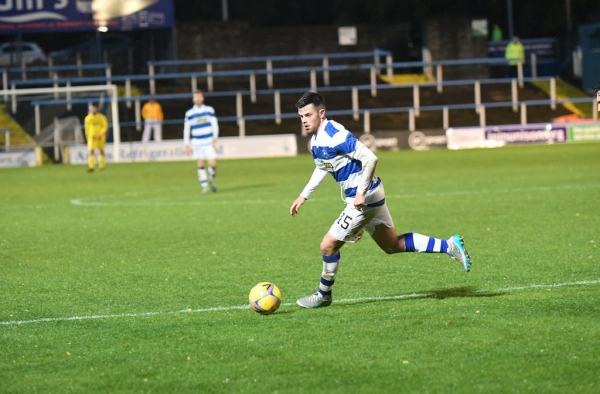