Managerless Morton went down to a 1-0 defeat away at Partick Thistle this afternoon as they suffered their first loss of the 2018/19 Ladbrokes Championship season.

Despite a numbing 24-hour period in which Ray McKinnon and Darren Taylor dropped a bombshell by departing Cappielow, the players arrived in Maryhill determined not to let the shock events serve as a distraction.

Bossed by director of youth Derek Anderson, a former Ton defender who holds a UEFA Pro Licence, and head of development John Sutton and backed by 821 impassioned away fans, they went out and gave it their all.

Unfortunately, if understandably considering the circumstances, they left Glasgow empty handed due to Chris Erskine’s well-taken goal scored five minutes into the second half.

Although it barely registers in the Morton richter scale at the moment, Partick were bizarrely denied a second goal despite Kris Doolan’s curled shot clearly crossing the line after crashing down off the crossbar.

Anderson and Sutton were handed the reins for the fixture late on Friday evening without even being able to take a training session with the team.

And the caretaker duo made just one change to the team that beat title favourites Ross County seven days earlier by replacing Jack Iredale with Denny Johnstone.

Johnstone was making his first senior start of the season, and he was presented with an ideal opportunity to make a perfect return when Bob McHugh slipped a pass inside from the left after two minutes.

The hitman charged onto the ball and side-footed a powerful low shot at goal, but it was too central and Partick Thistle goalkeeper Cammy Bell did well to push clear.

The visitors were clearly fired up and emotionally charged by the previous night’s events and made a blistering start to the match, with Michael Tidser also seeing a penalty claim waved away.

Defender Gregor Buchanan was a tower of strength at the back, and a real threat at attacking set-plays, using his 6ft 3in frame to cause chaos in the opposition box.

Unfortunately, the former Livingston centre-half couldn’t quite hit the target with his headers from the deadball deliveries despite dominating his opposite number in the air.

Ton were on top for most of the first half, but they had former Jags keeper Ryan Scully to thank for them going in at the break on level terms.

Scully rode to the rescue in the 37th minute by racing off his line to get to a through ball first before patting down Erskine’s attempt to lob him after picking up the loose ball.

There was little the Dublin-born shot-stopper could do when Erskine fired Alan Archibald’s side in front five minutes after the restart.

Midfielder Craig Slater drove clear down the left and picked out the long-serving Thistle man hanging back on the edge of the box, from where he lashed a fierce first-time shot beyond Scully into the top-right corner.

Partick were convinced they had doubled their advantage five minutes later when striker Doolan pounced on a break of the ball after a corner from the right and curled a shot in off the underside of the bar.

The ball clearly crossed the line, even rippling the inside of the netting, but the main stand-side assistant referee’s verdict was no goal and play resumed from a throw in on the left

Confusion reigned at Firhill; both Erskine and Blair Spittal were booked for dissent while Anderson and Kenny Arthur got involved in a touchline spat.

Things had just about calmed down by the time the Ton director of youth and Sutton were forced into a change just after the hour when Lee Kilday had to be withdrawn due to a hamstring injury and replaced by Kerr Waddell.

They then followed up with a double change to inject fresh legs and pace into a team that had ran itself into the ground for 70 minutes, bringing on Scott Tiffoney and Ben Armour for Tidser and Johnstone.

Armour came within inches of making himself an instant hero, showing incredible acceleration to get to Rory McKeown’s curled pass over the top before Bell and attempts to flick it over him only to see the keeper block.

Scully followed suit at the opposite end, doing superbly well to sail to his left and repel an Erskine thunderbolt before blocking Niall Keown’s follow up from an acute angle.

The second half largely belonged to the hosts, but the Ton finished strongly and went close to an equaliser on a couple of occasions.

But it was clear it wasn’t to be their day when Ross MacLean fizzed a cross into the box and Keown bulleted a header into the back of defensive partner Sean McGinty – and the ball rebounded into the grateful grasp of Bell.

Despite the result, their first reverse of the league campaign, the Ton squad could be proud of their efforts in what must have been onerous and awkward circumstances.

Manager Jim Duffy insists his players deserve tremendous gratitude for their display against Dumbarton on Saturday, adding that they earned… 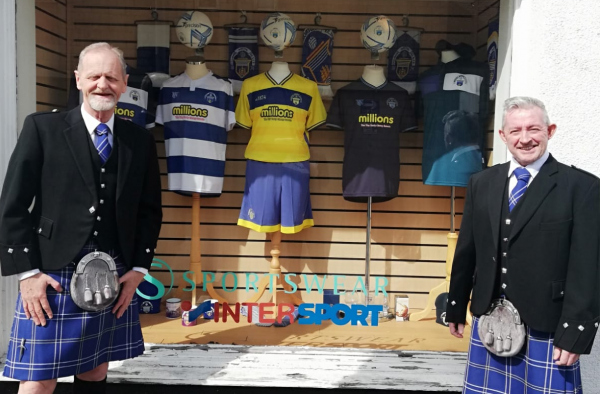 Player of the Year Event – with a ‘tarton’ twist

With just six days to go until the Greenock Morton Player of the Year Night on Sunday, co-presenters Gerry…