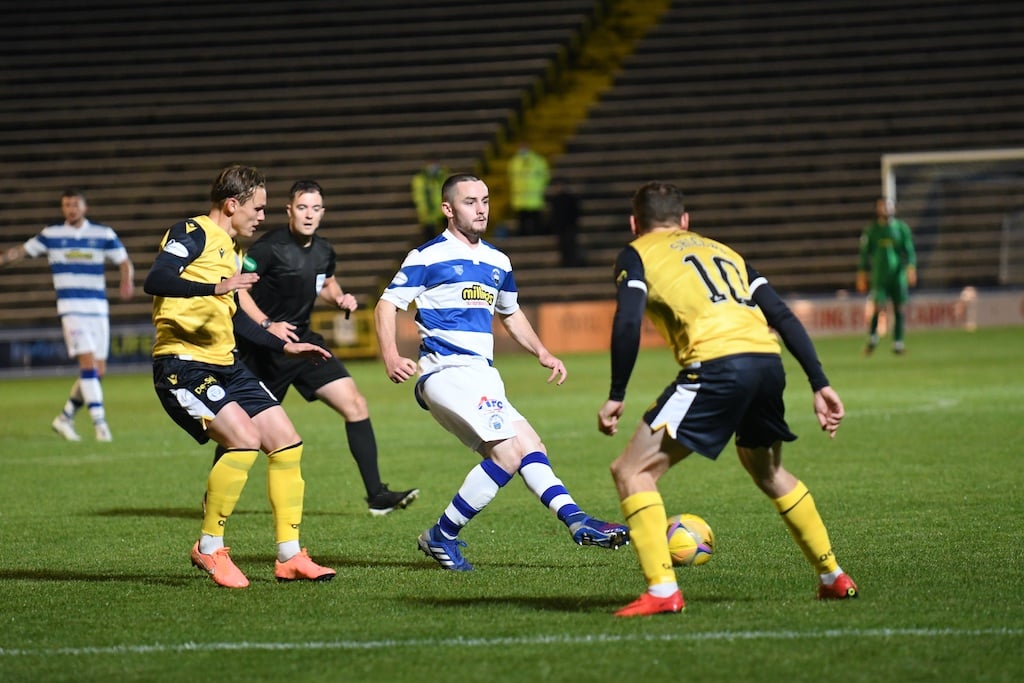 Morton started their 2020/21 Betfred Cup Campaign with a penalty shoot-out defeat at home to Queen of the South at Cappielow Park.

In his team’s first domestic match in seven months, David Hopkin handed competitive debuts to Aidan McAdams, Rabin Omar, Josh McPake and Ross McIver and it was the ‘Ton who took the initiative and pressed with intensity from the first whistle forcing Queens back into their own half.

The home side had an early shout for a penalty turned down by referee Don Robertson when Josh McPake collided with Ayo Obileye in the box.

Deadlock was broken on 18 minutes when a Lewis Strapp through-ball found its way back outside the box to Rabin Omar who fizzed in a driven cross that was deftly glanced home by Sean McGinty.

Within five minutes, Morton could have had a second when Brian McLean headed just wide from an Aidan Nesbitt cross.

The Doonhamers had to wait until after the half-hour mark for their first real opportunity of the game. Ultimately, Gregor Buchanan was unable to get onto the end of a long throw.

Morton continued to create chances towards the end of the first half with Aidan Nesbitt firing wide inside the box and Josh McPake slipping when clean through on goal.

Queens started the second half with far more verve to their game and tested goalkeeper Aidan McAdams with two crosses into the box.

The second of those crosses was deflected for a corner which was stabbed home from close range by Stephen Dobbie following a flick on from Ayo Obileye.

Morton could have regained the lead a few minutes later when Kalvin Orsi tried to round goalkeeper Rohan Ferguson inside the box but the goalkeeper did enough to steal the ball from his outstretched foot.

However, on sixty-eight minutes, the ‘Ton’s pressure was rewarded and the lead was regained following a shot across goal by Josh McPake being converted at the back post by Aidan Nesbitt.

The home side’s lead, however, would last only last eleven minutes as Conor Shields lashed home a finish from inside the box to restore parity. A cagey last ten minutes followed before the referee blew his whistle to send both teams into penalty-kicks and when Gregor Buchanan netted to make it 4-2, the contest was over.

David Hopkin pronounced himself pleased with the many positives to take from the game and although the Gaffer is never happy to lose a match, he feels confident that his side can develop in the coming weeks and months. Morton’s next match will be the Betfred Cup game against Queens Park at Cappielow on Tuesday October 13th.