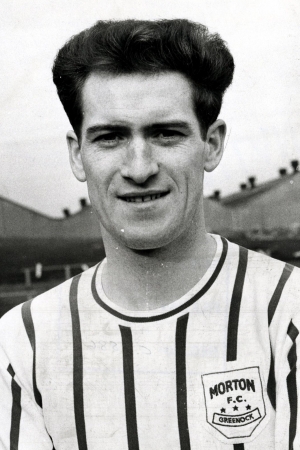 Allan McGraw is arguably Greenock Morton’s greatest ever servant, having offered over 15 years of service as player and manager.

McGraw signed for the club in 1961 and scored on his debut against Queen of the South, setting the tone for the next five years he would spend at the club.

In each of those, he was Morton’s top scorer, most famously in 1963/64 when he set the club record for most goals in a season with a staggering tally of 61 strikes in just 52 appearances.

That year’s goals helped Morton to the Second Division title and also to the League Cup final, where they would lose out to Rangers;.

His sensational scoring exploits did not go unnoticed though, with Hibs paying Morton £15,000 for the striker’s signature in April 1966.

McGraw’s exceptional service to Morton wasn’t done there. Allan was appointed manager in 1985, and it wasn’t long before he delivered further success, winning the First Division title in 1986/87 along with the Manager of the Year award.

In the mid-1990s he assembled arguably the greatest Morton side of recent times with the likes of Janne Lindberg, Derek McInnes, Alan Mahood, Derek Lilley, Derek Collins, and Marko Rajamaki gracing the Cappielow turf.

This side won the Second Division title in 1994/95, but sadly lost out on promotion the following season by the narrowest of margins.

With such an imperious record at the club, both as a player on the pitch and a manager in the dugout, ‘Mr Morton’ has more than earned the right to that grand nickname.