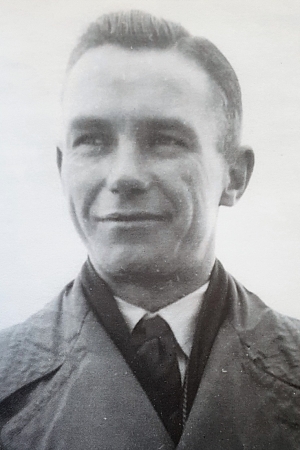 Billy Campbell is Morton’s most capped player after Jimmy Cowan with five full appearances for Scotland during his 1941-1949 spell with the club, which saw the right-Half feature 135 times in official competitions.

Signing from Morton Juniors in 1941, Campbell’s career was limited to appearances in the Scottish Southern League – a tournament which sprung up as a result of the suspension of the regular leagues due to the World War II – until 1946.

Morton recorded a best finish of second place in 1942-43. The previous season, the club were runners-up in the Southern League Cup, with Campbell scoring the decisive goal in a semi-final replay against Partick Thistle.

It was after the Scottish Football League reconvened in 1946-47 that Campbell really began to shine, winning the first of his five caps in Scotland’s 3-1 victory over Switzerland in May 1946.

A crowd of 111,899 witnessed that match, but even that figure was dwarfed by the 265,000 fans who turned up to watch Campbell and his Morton team-mates in the Scottish Cup final and subsequent replay against Rangers in April 1948.

Sadly, Campbell’s career was, in retrospect, in its final stages by this point and he never had the chance to add to the fifth and final Scotland cap he earned two months later as his career was cut short by ill-health.

Campbell retired from football in January 1949 at the young age of 28, signing off with a rare goal in his final appearance against Dundee.