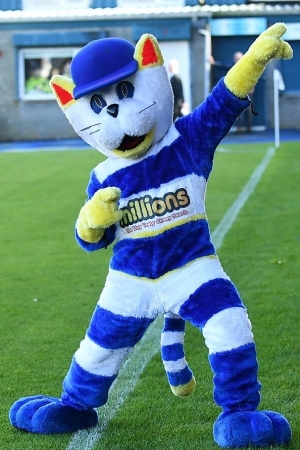 When former chairman Douglas Rae accepted the keys to the club, he didn’t know that he was embarking on a journey as a cat rescuer.

Cappie was just a kitten in 2001, happily living with his mum and litter brothers and sisters. The only interest he had in football was chasing the ball across the screen on the television.

Unfortunately for Cappie – his young life was to be completely disrupted when his human family moved house and didn’t register his microchip to their new address.

Cappie got out while investigating their garden, lost his bearings and began using the main stand at Cappielow for shelter, sleeping behind the away directors’ box which is where Douglas Rae found him.

Cappie wasted no time in growing his role: public appearances, dance-offs with Nuts the Killie squirrel and the occasional friendly banter with a certain Panda from Paisley.

However, on one fateful Halloween in 2012, Cappielow was broken into and horror of horrors – Cappie was abducted. A frantic door to door enquiry saw us search for our feline friend.

His body remained missing for a full week following the incident. It was a local fan who came to our rescue, calling late on a Friday evening to let us know that he’d been found at the side of Octavia Court.

Worse for the wear, Cappie took time to make a full recovery but our feisty feline was only absent from Cappielow for one home game. He felt he couldn’t let his loyal fans down especially after receiving so many good wishes.

His comeback was made in dramatic fashion, entering on a stretcher at the Partick Thistle game to a rapturous round of applause. Much loved by staff, players and fans alike, he’ll be at Cappielow for many years to come.