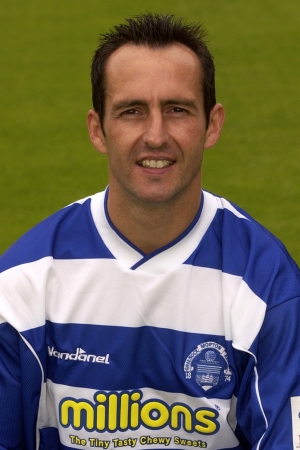 Derek Collins has earned his nomination as the club’s record appearance holder, having played a total of 618 times for Morton over two spells.

Collins made his debut in 1987 against Motherwell and went on to give 11 years of sterling service as a stylish, attacking right-back.

A consistently reliable player, Derek featured in the 1992/93 Challenge Cup final and was an integral part of the great 1994/95 Second Division winning squad.

He also coming within a whisker of achieving promotion the following season when Morton lost out in a last day shoot-out with Dundee United in a hard fought 2-2 draw.

After a further two seasons at the club and a total of 482 appearances, including the memorable 1995/96 campaign in which we came within a whisker of a second successive, Derek moved to Hibs for £120,000.

He would return after the club exited administration in 2001 and, as a member of the 2002/03 Third Division title winning team, Collins became the first player to represent the Ton in all four tiers of Scottish football.

Derek was also rewarded with a much-deserved testimonial in 2002 with an old boys match against local rivals St. Mirren at Cappielow.

Collins departed for Gretna in January in 2005 after a further 136 appearances, returning for a spell as assistant manager to David Irons between February 2008 and September 2009.