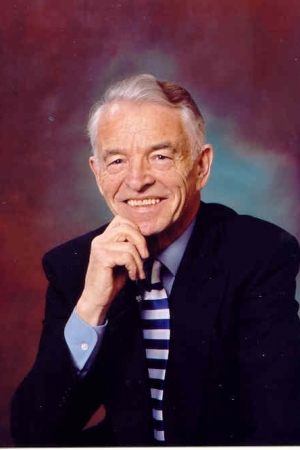 A lifelong supporter, Douglas Rae attended his first Morton match aged eight and held a season ticket each and every season thereafter until joining the board in 1988.

After over eight years as a director, he resigned from that role on 1 August 1997 prior to a regime change at Cappielow before returning to buy a controlling interest in the club and preserve its very existence.

Mr Rae stepped in to prevent administrators from plunging the club into liquidation in August 2001 and served as chairman for 17 years.

He saw the club participate in national cup finals and watched as footballing icons such as Sir Stanley Matthews and Tommy Lawton turned out as war-time guests.

However, more recent events ranked as personal highlights, including the final-day victory over Peterhead to clinch the 2002-03 Third Division championship and a shock League Cup success against Celtic at Parkhead in September 2013.

As owner of successful local confectionary firm Golden Casket, Mr Rae was the recipient of an OBE in the Queen’s 2016 birthday honours list.

He stepped down as club chairman in April 2018, following the final game of the 2017/18 season, due to ill health and took up the role of honorary club president, handing the reins to son Crawford.

Mr Rae sadly passed away on Saturday 23 June 2018 aged 87. Supporters paid a touching tribute to his Cappielow contribution by lining Sinclair Street and applauding as his funeral cortege passed the ground.