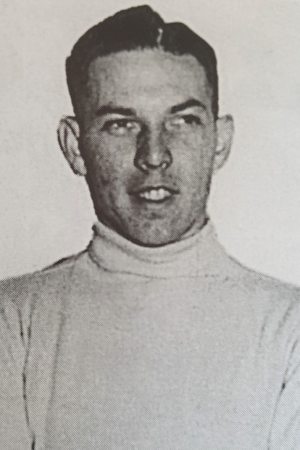 Jimmy Cowan needs no introduction to students of Scottish football, boasting as he does 25 Scotland caps and an enduring reputation as one of this country’s finest ever goalkeepers.

It was during a nine-year spell at Cappielow that Cowan garnered that reputation. Signed from St Mirren in 1944, military service prevented him from making his debut until 1947.

His first Ton appearane, which came away to Hibernian, was a memorable one as Cowan provided a glimpse of his capabilities by saving two penalties.

He won his first Scotland cap just over a year later in what proved to be something of a mixed month for him, with the high of that debut being preceded by a Scottish Cup Final replay defeat to Rangers at Hampden.

Cowan enjoyed one league winner’s medal in 1949/50 and suffered two relegations, but the keeper had his fair share of glory for his national team.

He won the British Home Championships in 1949 and 1951, and it was in a match against England at Wembley (Pictured) in the former success that saw Cowan cement his place as a Scottish football great.

Morton were Cowan’s first love, though, and he always wore the club’s blue and white hooped jersey under his Scotland top.

As the club’s most-capped player, James Clews Cowan richly deserves his place in both our own and Scottish Football’s Hall Of Fame.