The Inside Scoop With … Conor Brennan

In our regular website feature, a Morton player gives both an insight into his career and the inside scoop on his Ton team-mates by answering a series of questions posed by media officer Jonathan Mitchell.

Any targets set for this season: Collectively, it is to finish the season as strongly as possible and hopefully give it one big push to get in the play-offs.

Best ground you’ve played at: I managed to get a game at the Emirates Stadium during my time at Leicester City when we played Arsenal in the academy leagues. That was a brilliant ground and it was quite new at the time I was there. Parkhead and Ibrox are also good.

Favourite Band/Musician: I like a lot of acoustic music. Ed Sheeran is very good and a few old-school bands like Snow Patrol, Razorlight, and Coldplay.

Choose any three people to go on a night out with and tell us why: It’s hard to say because I’ve only been in the door a few months. I could see myself and Michael Tidser sipping a glass of red wine and playing the guitar sometime in the future. Tam O’Ware is someone who I’ve been out and about with and we seem to bounce off each other quite well, and lastly Derek Gaston, because he can pick me up and drop me off. He would need to wait in the car, though, because his banter is so bad he would bore you to sleep on a night out.

If you could swap life with any team mate for a week, who would it be and why: I would swap with Ross Forbes. There’s something about him I can’t put my finger on. He definitely has a mystery life outside football. Something like Dexter, I’d say.

Fastest team-mate: I would say Jai. Don’t think he’s kicked a ball since I’ve come in but he’s even quick on crutches so I’d go with him.

Slowest team-mate: I once saw Derek Gaston take a cross in training and he had his indicator on. He turns like a bus. Saying that, I remember running past Tam O’Ware after making a save last week.

Most skilful team-mate: Frank Ross has got a trick up his sleeve.

Best Dresser: Big Ricki comes in like he’s going on a night out every day. Big guy looks decent with the shoes and hair.

Worst Dresser: There’s a few. Gary Fraser will wear shorts no matter what the weather is. Gats has a Zara jacket and the blue was washed out of it about four months ago. Lee Kilday comes in like he’s just woken up sometimes.

Team Hardman: Strappy loves a 50/50, but that’s only because his touch is that bad he needs to make a tackle. Mark Russell has a bit about him.

Best Trainer: Michael Doyle is a good trainer, but when he does extra he needs to make sure he sets up cones for the gaffer to see him. John Baird puts in a shift in training also.

Worst Trainer: Andy Murdoch flies under the radar here. I’ve seen myself walking in from training and not even realised he’s trained!

Best Dancer: I’ll say big Ricki loves a move or two! Can’t walk past a mirror without looking in it, though.

Biggest Joker: Jai loves throwing wee bombs in here and there, and Gary Oliver tries to wind boys up but his banter is terrible.

Most intelligent team-mate: Big Thommo seems to be sharp and know what he’s talking about. I can picture him walking down the street with a briefcase in a few years.

Least intelligent team-mate: Got to be Scott Tiff. The wee guy has a head full of air. One time he asked me if Northern Ireland was one hour ahead of Scotland or one hour behind.

Biggest Moaner: Gats is always moaning that he can’t catch the ball but there is nothing anybody can do about that.

Tightest team-mate: Gary Oliver is always arguing over a fine! I once saw him lend someone a pound for a locker and he keeps asking for it back every day, and then laughing. Don’t think he’s joking, though. I’ll maybe just give him a pound so he stops asking for it.

If you could pick a wish for a team-mate, what would it be and for whom: It would be for Bob McHugh to get a pair of shorts that fit him! I don’t know if it’s because Andy the kitman hasn’t been in but they seem to get tighter and tighter and it’s slightly off-putting. 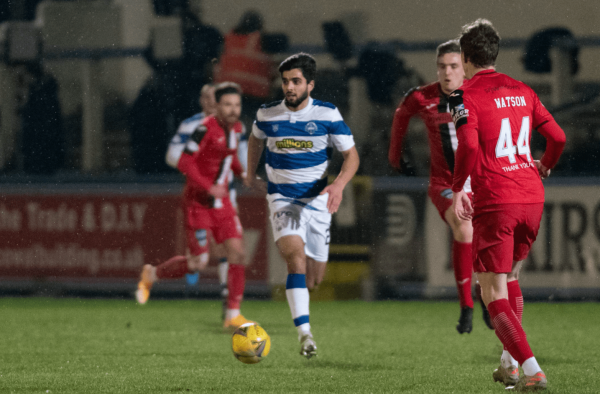