Thomas O’Ware is currently the longest serving player in the Morton first team having joined the club in 2011 as a youth player from Bonnyton Thistle. O’Ware made his debut for the club in November 2011 in a 5-1 Scottish Cup victory over Highland League side Deveronvale. He went on to make 14 appearances in his first season despite an injury which put him out of contention for a spell.

Having been at the club for so long, it is often easy to forget that O’Ware is only 22 years old. Although O’Ware has now established himself as centre back, he began his time with Morton by filling in at left-back due to injuries. Since then, the 22 year old has won the affection of the Morton fans with his dedication and clear passion for the club.

One of the highlights of last season for many of the Morton fans came when O’Ware popped up in the last minute against Peterhead at Balmoor to snatch a crucial three points in a very tough game. Perhaps one of the most interesting games of O’Ware’s Morton career came in November 2013 when he played the full 90 minutes of a reserve game against East Fife in goal after injuries to Derek Gaston and Nicholas Caraux.

Impressively, the defender helped the Ton to a 2-1 victory which included a number of excellent saves. When asked how happy he was to sign with the club again for the 2015/16 season, O’Ware said, “I love the club and this is my fifth year hear. I had such a good year last year and the manager made a new offer and I was delighted to stay.” On the title winning League One campaign, he said, “Last year was absolutely brilliant. I think a few of us thought we had mucked up a bit towards the end but we had a great run in the last four games and it was a great experience and one that I’ll never forget.”

As an extremely important part of last season’s squad, O’Ware is happy that the majority of the squad were kept together. He said, “We’ve kept more than half the team from last year which was great. “Last year was a really young bunch and a lot of us played first team football and gained a lot of good experience so that’s helped a lot coming into this year and the manager’s maybe not worried as much about it. It’s still the same group of boys we’ve just added one or two faces. I think it was important to keep a lot of us.”

The 22 year old also believes that the experience of playing in League One helped him develop as a player and said, “The other two seasons I was in and out of the team so last year playing in the team every week has helped a lot. Being in the team every week was really important for me.” On the start to the season that the team have made, he said, “I think we started off really well at the beginning but the last couple of weeks we’ve been unlucky with the points we’ve picked up. I think we’ve played better than other teams but we don’t quite have that winning mentality in us yet which is something we need to pick up.”

After knocking out Premier League side Motherwell in the last round of the cup, O’Ware is also optimistic that the Ton can cause another upset and make it to the semi-finals of the League Cup. He said, “I think we’ve got a good chance in the cup, obviously St Johnstone are on a good run of form and I’m sure they’ll keep that up but at the end of the day it’s a quarter final so anything can happen. “We’ve obviously got a bit of revenge to get because of what happened two years ago so hopefully we can get a good performance and a good result.”

On the best moments of the season so far, he said, “This season my highlight has probably been the Alloa game. Scoring the winner in my first start back from injury was a pretty good day. “It was annoying being injured at Easter Road but the Rangers game was a good atmosphere at Cappielow and you wish you could play in front of that every week. I’m looking forward to the other games.” Going forward for the rest of the season, O’Ware said, “I think if we just keep doing the main things that we’re doing right and just improve on one or two other things I don’t think we’ll be far away from a good season.

“Obviously I’m happy to get in the team and my main aim is to stay in the team and be playing well.” O’Ware will now be looking to help Morton towards victories in the games against Alloa and St Johnstone which are both crucial for different reasons. 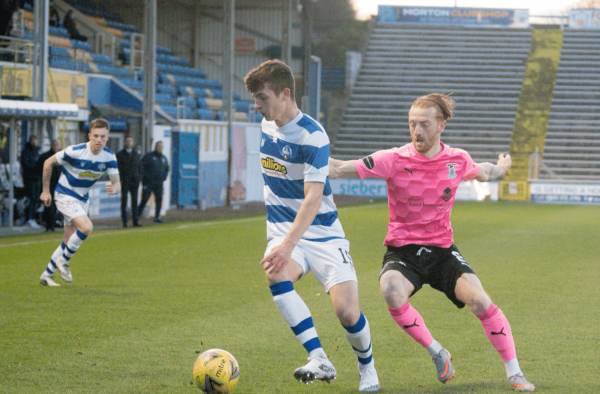